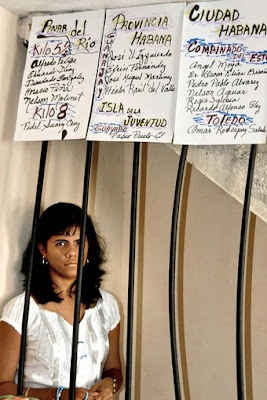 It was by chance that I heard the story of this twenty-nine-year-old doctor and her husband, Horacio Piña Borrego, 42, a freelance journalist imprisoned for the cause of 75.  As she told me the odyssey of her fate, it was as if she was reading from a chapter of Wuthering Heights. These things don’t happen in real life, I thought, but if they do I have to talk to this woman, I have to report this.

A mutual friend connected us and I decided to call her to hear her testimony. Suyoani’s words pierced my heart and although they say everything is more distant on the phone, when she cried I  cried too on the other side of the handset. I didn’t think I would publish an interview but rather that I would tell her story; but after recording it, to convert the life of this girl into my own words seemed a sacrilege.

Q: How did you meet Horacio in Canaleta prison?

We met for the first time in a punishment cell. It was shocking to me because I wasn’t a doctor in the isolation zone, I was on duty and they sent me to look at Horacio who was feeling ill.

When I entered the corridor there was an incandescent bulb, no sunlight enters there because the windows are blocked with a piece of zinc. It was a huge space, I can’t tell you how big it was — it’s incomparable — there were many small cells, extremely small. And there were five there from the Cause of the 75, [from the Black Spring of 2003]: Raúl Rivero, Ariel Sigler Amaya, Luis Milán Fernández, Pedro Pablo Alvarez and my husband, Horacio Piña.

I remember that Horacio had a headache and high blood pressure. When I saw him through the bars it was extraordinary, from that instant the two of us realized something was going to happen. At that time I never thought we would end up getting married, and we would even have a daughter. But it was magical, I have great faith in these conditions, to get to know a person, fall in love there, and to get married and have a family, it really has to be the work of God.

Q: Why were the five of them in punishment cells?

There was no reason for this, it was where the authorities had put them. These were the punishment cells for common criminals, but also the isolation zone. When they were imprisoned they were put there with those condemned to death and life in prison. Horacio was there for a year and four months.

Q: When did you realize you were falling in love?

At first we were just friends, although from the beginning we identified with each other. On May 13, 2004, we had our first kiss — almost a year after we met — because as he was in the isolation zone we rarely saw each other, only once or twice a month.

In the prison the relationship between the prisoners and the guards and doctors is very difficult, they spoke very badly of him to me. My husband told me many times he wanted to start a conversation but he was afraid of disappointing me, or saying it in the wrong way, or other things given his situation. I also wanted to talk to him, but also was afraid.

It took a long time before we could talk, only when they transferred him to the regular population with the rest of the prisoners could we see each other almost daily and we started our relationship. I took care of the chronically ill and he had various diseases.

Our union was, despite so many adversities, very strong; we never talked about something temporary, on the contrary, we always made plans for the future. We had a lot of problems because there are things you cannot hide: State Security realized that something was wrong, that I was helping not only him but the others as well. They started to watch us, and although they never obtained clear evidence of our relationship, they suspected it. After Raúl Rivero wrote a poem about our story, State Security confiscated it.

Horacio is wonderful, the person I chose to model myself on, I rely on him, he gives me great strength to live and to carry on. There are people who say to me, “How is this possible? You’re a young woman, you have your whole life ahead of you. What are you doing joined to a man sentenced to twenty years?” I simply answer: My husband is worth it.

Q: What were the consequences when they discovered everything? In your personal and professional life, what happened?

They came to look for me in the consulting room — I was just attending to Horacio — five State Security officers came and took me to an office, it all happened in front of him. It was a terrible moment, he knew that something was wrong and said to the officers, “Interrogate me! Leave her alone!”

They pressured me so I would confess. I am a doctor, a civilian employee of MINIT (Ministry of the Interior) and I was finishing my social service, we were nothing more than a man and a woman, they couldn’t accuse me of anything. The tried to intimidate me through my family, they threatened me; they told me they were going to tell my parents.

An officer asked in an interview how it was possible that a doctor, a graduate of the Revolution, could be in love with a terrorist. On that occasion I answered, “It seems that you and I don’t have the same concept of what a terrorist is, Horacio Piña is not a terrorist.”

They transferred me to another MINIT unit, and he was then sent to Pinar del Rio. The last interview in Canaleta was July 18. Horacio was transferred on the morning of August 11 to Combinado del Este and then to Pinar el Rio. That is, he only spent a few days in Ciego de Avila after I was sent to a unit made up of offices with nothing to do with prisoners. They said they didn’t want to lose a doctor, so they made a job swap: a doctor in a school was interested in changing jobs, so she went to MINIT and I went to the school.

Q: So they wouldn’t allow you to continue working in prisons?

No, they knew that, having a relationship with him, I was going to help him. They don’t want, they can’t even imagine, that someone could make things easier for him. There were times of great pressure, there was the day I was waiting for a bus to go to work and at the stop one lady said to another, “There is a doctor with a terrorist in prison here in Canaleta.”

That little designation of “Doctor with Terrorist,” they were ordered to disclose back in my province. For my family it was also very difficult, they called my parents from their jobs. They were very hard times for everyone, including for him, because he felt helpless while I was going through the whole situation.

Q: And your family, how did they react to such pressure?

I have a fantastic family… I can hardly talk about it. In the case of my dad, because my mom is a little bit more quiet, he told me, “If we don’t help you, who will then? You are my daughter.” Remembering this hurts. The day State Security interrogated me, they also interrogated my father. The next morning when I was leaving for work he asked if I wanted him to go with me.

“Then hold your head high, you have done nothing to be ashamed of.”

And I will always be grateful for this, really I have so much to be thankful for because both of their jobs are related in one way or another to the government, to the system. Another family may not have taken this position. The officials even asked my father why I was still living under his roof and he said,

“No way will she leave this house, she is my daughter and I will support her in everything.”

And so he always has done. It’s been almost seven years and here I am in Pinar del Rio. Despite being so far away they have helped me a lot.

Q: What about people, what attitude have they taken to the defamation? Your coworkers and your friends?

I’ve received the support of many people. Horacio is very sociable and easy to love. The nurses help us a lot and he even stays in contact with people in Canaleta. I told him at that time, “You have eyes in the back of your head,” and he explained himself, saying, “The friendships warn me of dangers, they let me know when someone who is harmful to us is nearby.” State Security hasn’t been able to destroy people’s solidarity, it’s a thorn stuck in their throats and that’s why they won’t let me live in peace. I have always been persecuted, I haven’t had a moment’s tranquility. Here in Pinar del Rio, for example, when I start work somewhere the same thing always happens, at first no one says anything, but later, when we know each other, they confess, “Doctor, I have to say one thing, before you came State Security was here and told us we had to inform on you, about everything you do, when you come and go.”

They have called my parents and pressured them to ask me to come back, they say they will give me a job, locate me in the provincial capital, that nothing will happen to me… They’ve even gone that far.