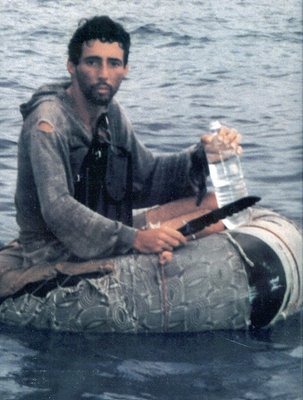 HAVANA, Cuba — Although it is increasingly risky, crossing 90 miles on a raft continues to be the dream of the young people. My neighbor Alfredo confessed to me his determination to undertake a journey that could cost him his life. He already has the exact measurements of a raft, the paddles and a sail, parts with which, this summer, he will try his luck against the waters of the Straits of Florida.

“If I die from drowning, I don’t care,” he said, “completely, if here I’m dead in life. There are no changes or anything close to it. I live overcome by anxiety.”

As someone who is self-employed — at first — he had the illusion of achieving some goals, that he dreamed of for more than 20 years, but the reality was stronger than his dreams. The harassment from the State inspectors, being forced to engage in more than one illegality in order to make a profit, and the rising prices of raw materials on the black market, made it impossible for him to make and sell pizzas.

Despite the risky plan to get to the United States, thousands of young Cubans only dream of escape, like Alfredo. “It is impossible to live in peace. Between the fines and the chance that they will close your business for not complying with the established rules, you can’t get ahead. This could be fatal and you can end up in jail. So I will try to see if I can get to the Bahamas. I know it’s hard to get asylum, but maybe I’ll be happy. I’m determined, whatever happens,” Alfredo says, without listening to my advice to avoid such a dangerous solution.

In recent weeks, hundreds of the self-employed have surrendered their licenses because of so many problems in doing their work. Without wholesale markets and with the rampant corruption,  efforts to get ahead are in limbo. Young people just think about leaving the country.

But this exodus has grave consequences for the social and cultural order. With low birth rates and the constant migration of young people, the future of the island is bleak.

On the other hand, those who dream of leaving and don’t make it, sink into marginality. Alcoholism, suicides and endless uncivilized behaviors are the escape valves.

Alfredo is ready for the challenge. Will he reach his destination? Will it be returned to the Island after being caught on the open sea by U.S. Coast Guard? Will he die in the jaws of a shark?