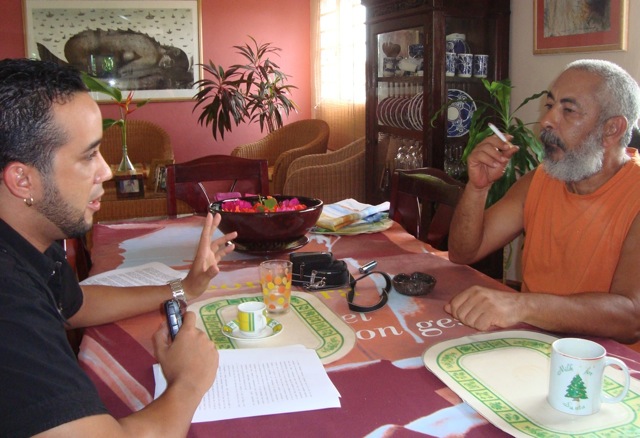 Leonardo Padura just won the “Roger Caillois” Prize. We universal lovers of literature received the news with a mixture of satisfaction (almost personal) and unjustified astonishment: for a long time Leonardo Padura has exceeded the boundaries of what some call Cuban literature, and has become an indispensable narrator of today’s literary landscape.

If prizes demonstrate their rigor through the names of those who earn them, the “Roger Caillois Prize” is more than just another trophy in display cases: writers like Mario Vargas Llosa, Carlos Fuentes, Jose Donoso and Adolfo Bioy Casares have set the bar high, not just for Leonardo Padura, the first Cuban to receive it, but for any other dreamer of fiction.

Shortly before I left Cuba, Padura received me in his airy house in Mantilla, where harmony between plants and mascots (Padura, like Ramon Mercader in his novel, also loves dogs) is almost material, nearly palpable, and he dedicated some two hours of the interview responding to the reader-journalist curiosity of one who has never stopped seeing him as a rara avis of the Cuban intelligentsia: a force in the circles of publishing and power, a truly independent writer in a country where independence is a dirty word.

I think about Leonardo Padura at this point, with his increased popularity, and the luck of having committed intellectuals, above all, to the cause of his creative honesty. I can’t stop evoking some fragments of that jealously-recorded conversation where, in addition to his fiction, a central theme was the reality that drives it.

— You have always given me the impression that Leonardo Padura lives in a kind of inner diaspora in his own country. In what some call the “insile.” I’ve never see you on the jury of a national contest, never seen you as a special guest at Cuban book fairs, or giving lectures or even on national media. To what do we owe this?

Look, I have tried to establish a perimeter of privacy and space for my work. But I’ve also been especially selective with the literary Cuban life because, first, the way it has developed doesn’t appeal to me in many ways, and especially because I don’t think participating in it offers me anything as a writer. Though that may sound too harsh. 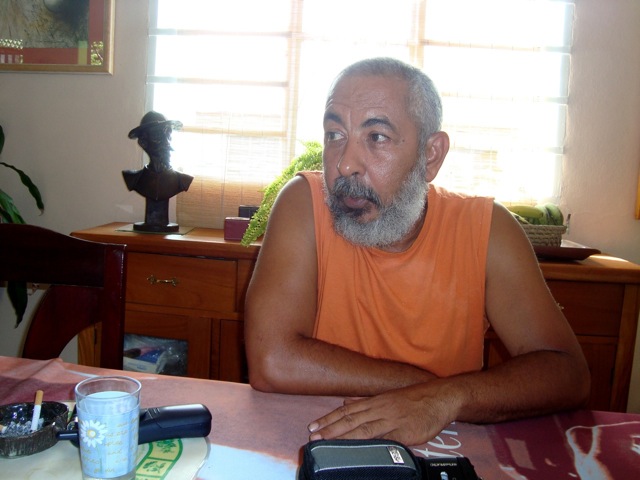 I am receptive to invitations from libraries, for example, because I respect the work of these people and the need readers have to approach a particular author.

But as to the book fairs, both in Cuba and abroad, they seem to me like commercial spectacles, including politicians, so I’m not interested in participating.

In fact, if I frequently grant interviews it is because I don’t like to say no to reporters. I’ve also been a reporter and I’ve fucked over a lot of people interviewing them so I refuse to grant them now…

— An excellent point I’m about to touch on. Leonardo Padura, before devoting himself entirely to literature, was a journalist. I seems doubly seductive to me to ask him his opinion about the press we’ve had for decades in Cuba.

Look, I graduated in Philology in 1980, as a specialist in Latin American literature. That same year I started work at “The Bearded Caiman.” From then until now, I’ve worked for the newspaper “Rebel Youth,” for the chief editor of the “Gazette of Cuba,” and since 1995 I’ve done freelance journalism because without working for one in particular I’ve had many ties to different international media.

That is, I’ve never stopped doing journalism in these 30 years. So I have a good perspective on the craft.

And I’ve always thought that this country has good journalists but is far from having good journalism. There are a very good professionals in Cuba, but there is no platform where they can fully develop their work, so this doesn’t get translated into talented journalism.

Journalism in Cuba has the serious problem of there being only one orientation. There is only one political vision, one ideology, one owner of the media, who believes there is only one information policy. So Cuban journalism responds more to campaigns dictated from the ownership of the press media than to the interests of groups and sectors, including the individuals who do journalism.

This is the case not only in Cuba, but in the Cuban case it is exacerbated because this one-sidedness is more evident.

The journalism in this country should have a greater sense of inquiry into the problems of the Cuban reality. Suddenly work coming from this position appears, with this objective, but it’s an isolated case rather than one consistent with the common position.

But in general I do believe that Cuban journalism needs to be much more participative in reevaluating of the national context as it is happening today, from which, unfortunately, the press continues to be quite distant. 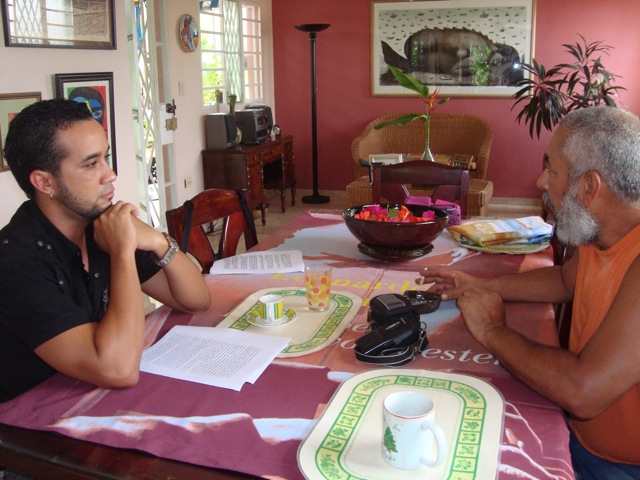 — Let’s talk about censorship and politics in Cuban literature, Padura. From your experience as a writer with broad links to foreign publishers, who even now doesn’t have a problem with Cuban censorship, how do you assess the current criteria for publication in the country?

The first problem in publishing books in Cuba, the essential problem, is that there is no book market.

The market has been demonized in this country, with and without reason. From political interests and from intellectual interests. Because we often speak of the book market at the international level, say the United States or Europe, not only from the political side but also from an intellectual posture of people who have had no access to this market, and who have a very distorted image of it.

As Cuba has no book market, as books here are published only with one cultural and political viewpoint, this evaluation of which books to publish is very immediate, very much one of convenience, and this is serious as cultural politics.

For example: for some ten or twelve years it seemed that only author in Cuba was Enrique Nunez Rodriguez. This excessive importance given to the figure of Nunez Rodriguez is, I think, one of the examples of how one can manipulate a promotion and a publication from certain political interests.

I think this has greatly affected Cuban literature. It has affected the point of access of Cuban writers to the international market, making it very complicated, because there is no internal market to establish value, which would allow international editors to orient themselves in this landscape.

— After reading several of your novels, making a kind of accounting, I find that the majority of your characters are frustrated, lacking in positive energy, many of them disabled. And they are described as markedly Cuban. Is there an intentionally pessimistic vision of Cuban society in your work?

These characters are a reflection of circumstances, of ways of thinking. They are the result of an evolution of Cuban social life in the last 50 years.

Many of these characters that you’re talking about form a part of our context, which we have all lived. They are an expression of what has been called the “narrative of disenchantment,” and it has a lot to do with the disenchantment that my generation suffered especially in the 1990s and that we carry with us still today, this feeling of failure, loss, frustration.

The fact that I have had the good fortune to achieve professional fulfillment through literature is something singular, almost unique, in the context of a generation that basically has dispersed.

There are resentments that have been created over the years precisely because of the geographical, political, ideological and social distances, and there are, especially among those who have been left here, a feeling that their time has passed without their ever having the opportunity to take advantage of it as they would have wanted.

Perhaps without my meaning to, many of my characters could form a kind of collage of disenchantment that has beaten down my generation.