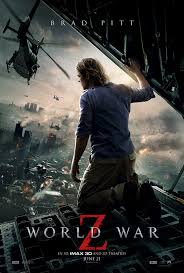 My neighborhood, a quiet residential one before the process of “updating the model,” has undergone a remarkable commercial transformation. In fewer than four blocks, not counting cut-rate cafeterias, you can find: an Indian food restaurant, another with creole cuisine, another Chinese, and another with international cuisine; three billiard rooms, an English school, and three gyms (the best being the newest and most expensive). I don’t have to walk any further to include a very nice store, a bakery and a spa. But they have just opened, closer to me than the Acapulco, a 3D cinema, called Adrenalina, and as part of Rafa’s twentieth birthday celebration, we went there this past weekend to see World War Z.

The film is forgettable, despite Brad Pitt and 3D. What impressed me was the theater. Located in the vast basement of the house that belonged to Mariano Rodriguez, the painter’s former studio has a room with comfortable seating for twenty people, arranged in tiers, a twelve-foot screen, surround sound, air conditioning, and a small VIP room for six people, with a three-foot screen.

The lobby is tastefully understated. Over the counter, where they will soon be selling cold cuts, is a photo of the painter with his beloved dogs. For now, they only sell popcorn and soft drinks, not included in the price of the movie; no alcohol because the business license is for children’s entertainment.

I saw the 3D, and the truth is I can live without it; I will not return to pay three CUCs for a ticket. It is very good for business. Ultimately the owners and employees emerging during the heat of the update will benefit from the burgeoning middle class, bourgeoisie, or whatever you call those who make up most of the clientele of these places. And who knows what will happen with these customers and with these developing private entrepreneurs: they now have money, maybe tomorrow they will also want democracy.