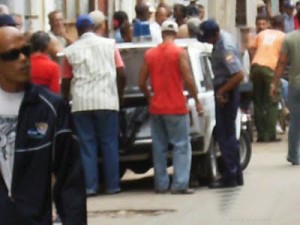 Havana, Cuba, August, www.cubanet.org — More than a month has passed since the words of army general Raul Castro Ruz in the first ordinary session of the eighth legislature of the National Assembly of Popular Power in the Convention Hall, July 7, 2013.  If some believed that after that discourse things were going to improve, they were wrong.  Time has passed and still no measures have been taken to support the population.

To cite just some of the vicissitudes that confront the Cuban day after day, we have the worst quality of bread, the price changes in the Hard Currency Stores (TRD), as well as the lack of nylon bags in which to pack purchases, that nevertheless are sold on corners by individuals; the scarce and deficient repairs of leaks by Havana Water, the theft in the farmers markets, the long lines of pensioners on the sidewalks, in full sun and sometimes in the rain, to collect their pensions, and the impediments imposed by many officials of state agencies — like the Civil Registry and Housing — in hopes that the applicant will offer gifts or money in order to streamline management.

Meanwhile, the administrators and public officials, the vast majority militants of the Communist Party (PCC) — an essential requirement to occupy management positions — remain insensitive before this situation.

The absence of directors or administrators when some client requires his presence to express a complaint is common, and in the face of the frustration, it is frequently heard:  “There is no one here to fix it.”  Others allege that the indolence of these is supported by the corruption of many inspectors.

Tita also heard the words of Raul and thought that things soon would change. Therefore, when she bought 10 pounds of yams at the farmers market and ascertained that they had shorted her on the weight, she went to see the administrator. This one listened to her without saying a word, and left walking with her to the platform where the offender was selling, and ordered him to fulfill the weight for the woman without even verifying if she was right. Then he did nothing else except turn and return to the office as if it was nothing.

My neighbor Robertico keeps buying breakfast bread quite early in the morning.  On asking him why he does not buy it the day before, in order not to get up early, he answers me that if he does so, the next day the bread has mold.  Several consumers have complained, but the administrator ignores them time and again.

Many bothered consumers ask themselves if among the Physical Planning regulatory violations which Raul spoke about, they will include the dwellings that, in order to facilitate certain blocks of commerce, they are constructed in spaces seized from butchers, bodegas, dairies and vegetables stands.

More than words are needed to end theft and corruption, two of the greatest causes of moral and material damage that our society suffers.

Gladys Linares. Born Cienfuegos, 1942. Primary teacher. She worked as a geography teacher in different schools, and as the director of some of them, for 32 years. She joined the Human Rights Movement at the end of the 1990s through the Humanitarian Feminine Front organization. She actively participated in the Cuban Council and the Varela Project. Her reports reflect the daily life of the population.