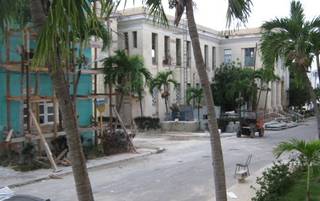 It comes to my attention that in recent months the World Bank has reported that, according to their evaluation, Cuba has one of the best public education systems in the world, with acceptable teacher pay, and the United Nations World Health Organization (WHO) has said something similar about the public health system.

What’s more, CNN has placed Cuba among the ten countries with the highest level of public hygiene. With the majority of my years having been lived in Cuba, and having suffered and continuing to suffer from one system or another, it seems to me like a bad joke.

It seems that those who make these assessments use official data from the Cuban authorities to prepare their analysis and come to their conclusions, without taking the trouble to investigate and conform their veracity.

If they took a tour — without official authorization nor government handlers — of our schools, polyclinics and hospitals (and not of the facilities prepared for visitors), they would see that the reality is very different from the statistical data.

They would find deteriorated schools, without adequate conditions to support the teaching process, hot, dark, unhygienic and with many “improvised” teachers, and the polyclinics and hospitals are in a deplorable state, lacking in hygiene, the technical means and equipment to care for patients, lacking in medicines, and in the case of those admitted, with terrible food, as well as medical attention offered primarily by students or recent graduates, as the better prepared are pressed into service in other counties, for which the State receives important economic and political earnings.

Propaganda toward the outside is one thing and the internal reality is another.

Since I know that these assessments do not reflect the truth, I also question that released about other countries, both for and against, because I think they use the same bureaucratic method.

The terrible thing is that this serves, wittingly or otherwise, to provide a misleading picture of two systems that Cubans have to endure daily. It’s like the story of the  torturer asking the tortured not to scream because he was enjoying one of the greatest torture in the world.