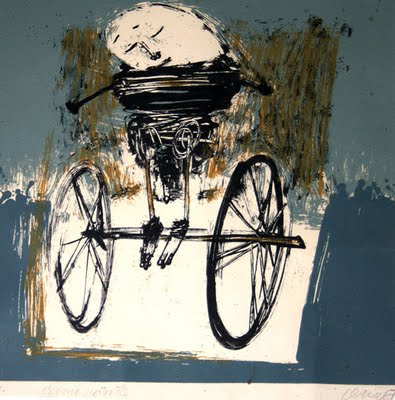 LET US NOT FORGET OLIVA IN HIS HOUR OF HORROR

I don’t know the Pinar del Rio painter Pedro Pablo Oliva. i don’t know anyone among the stateless dust of a people dispersed as are Cubans (maybe we don’t even go that far, and we are just an illusion of identity). But since 1987 I retain a small original signed by him, called “Traveler,” which surely cost a pittance in national currency because, at that time, unfortunately, the only thing circulating on the Island was the useless Cuban peso (not a few were imprisoned ahead of their time and for treasuring dollars in a half-smuggled box).

I like the unknown work of this unknown compatriot. I remember his “Fidel Grandpas,” sleeping like most of his nightmarish little characters with bizarre colors (although they give the illusion of being realistic). I know he had his run-ins for exposing Fidel Castro on his canvases, but I think that after the usual ministerial censure, one or another of his little Comandantes-en-Jefe in miniature did make it to the galleries (and they even used it on the cover of a magazine as official as UNION!).

Now winds of death come not only for the poor Cuban dissidents, but also for our intellectual enrichment. There will be no puppet with head left before the Apocalypse or Apoptosis of the Maximum Leader. Thus, after 13 years of creative work, Pedro Pablo Oliva’s Workshop in the city of Pinar del Rio has been closed by the state (miraculously they haven’t confiscated or worse: like the political police searched of an editor of the magazine COEXISTENCE, directed by his fellow from Pinar del Rio Dagoberto Valdés).

They accused this ex-deputy of the People’s Power face to face at a government meeting. They called him every name in the book, starting with “traitor” to the Revolution and, of course, to his so often daubed Fidel. They expelled him from everything. Abel Prieto, the outgoing Minister of Culture, called him and suddenly didn’t have the courage to berate him, so of course he, Prieto, got offended and hysterical and threateningly hung up. The art students in his province (and in the country) are prohibited from coming anywhere near him. As they seem to stink do they want to put the stink on him it seems. Who knows if they’ll have the police interrogating him at the earliest opportunity, if the international community doesn’t respond immediately, showing solidarity with the fate of this universal artist who publicly believes in a multiparty system and sees no political sin in being a pen pal, for example, to Yoani Sanchez.

I look at his “Traveller” from 1987. It’s been too long since then.On the cardboard a motley baby with pins is balanced on an axle with uneven wheels. Imbalanced. A skein as free as any labyrinth that is nothing more than a few brushstrokes without a map. What a sad image and what a painful destination for a career where conciliation came first, along with the aesthetic genius of Pedro Pablo Oliva. Cuba is cannibalizing the best Cubans. The future belongs by right to the carcass of this foolish nation.

The bearable spaces on the island promise to be zero. Like during that excited idiot with perestroika, the political police today with personnel to spare cauterize, one by one, our critical or even nonconforming personalities. Exile, illness, trapped by some common crime. I recommend silence to them. To survive, please. We will need them so much tomorrow in the midst of the new mafia. But, for now, if you read me with a shred of heart, don’t let the Revolution kill the soul of the painter Pedro Pablo Oliva. They tell me he cried alone like a child after hanging the closed sign on his workshop, where we are strictly prohibited to dream. He wept with the innocence of one of his own grotesquely charming doodles.

I’m sorry, unknown brother. Resist now. Your irrational share of the truth has touched you. You are as exposed as I am. Your success as an artist was running simultaneously with the many repressions that now by chance have hit you (your National Plastic Arts Prize of 2006 coincided with hundreds of prisoners of conscience all around). Still, I am with you. Dust off your little work of 1987, so Pinar del Rio. It’s just the damned circumstance of hate everywhere.