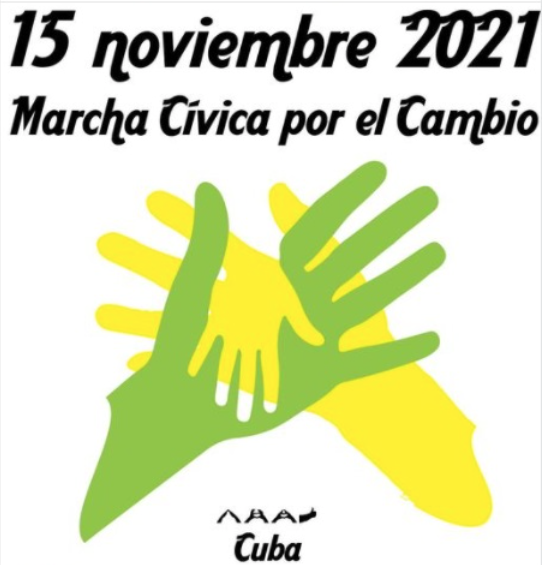 From the blog of César Reynel Aguilera, Montreal, 15 October 2021

In the year 2022, the country of our birth will mark 70 years without democracy. My parents have never been able to freely choose their ideology, their party, or their president. They have had to resign themselves to the decisions of others and have had to ratify those decisions to avoid trouble. In Cuba, unfortunately, to keep quiet about what we really think is seen by many as a sign of intelligence. They always ask us to wait for the right “time” and “place” — which never really come.

Almost my whole generation grew up hearing the phrase, “For your sake, speak softly.” Most of my friends have already left the country and others dream of doing so soon. I don’t want my phone to be recharged or a pair of shoes to be sent to me.* I want Cuba to be the nation to which everyone can return whenever they want — regardless of how they think — and from which no one, any more, will want to leave.

The Revolution promised rights, justice, freedom and free elections, but instead we turned into a Soviet appendage. It promised to be green as the palms, but instead wrapped itself in a red cloak with a hammer and sickle patrolling the Lone Star.** One sole ideology, censorship, and political persecution have been the daily bread of any Cuban who does not submit to the control of the bosses. And the end of the Cold War only increased our misery. We are survivors of an unfinished war, in which we were neither the victors nor the defeated, only hostages of an obsolete dogma, of a clan of officials clinging to power and its privileges, of a whim propped up with Russian-made rifles.

It is true that there were some achievements and wins — it’s not all gloom and doom. But what good are benefits if they will be used to blackmail me later? What is the value of my education if I am later forbidden to think with my own mind? Many slaves also learned to read. And they did not pay with money for their little corner of the barracks or their lunch, they paid with obedience and the sweat of their backs. If any of them happened to demand a change of regime, the whip, the stocks and the shackle would certainly await them.

I have already repaid the cost of my studies. Of this you can be sure. I went to all the schools in the countryside, I cut sugarcane, harvested potatoes in Artemisa and coffee in Pinares de Mayarí. I completed two years of social service, receiving the illusion of a salary. I owe a lot to my teachers, but as for the State, I have already paid my debts — stop dredging it up. Also, do not continue to use my work with cultural institutions as blackmail. To work is a right, not a privilege. And I have given as much as or more than what I have received.

I write these words while besieged by a cowardly campaign of lies against me and against the organizers of the march. The baseness is such that they have cut off our Internet services so that we cannot even defend ourselves within our networks. But I am not going to play the victim. Cuban ingenuity also knows how to circumvent these internal blockades. My only concern was for my parents. I know how much this hurts them, I know how much they fear for me. But I also know that they know their son. They have both overcome their fear and called just to tell me to be strong, and to say that they are proud of me.

It is obvious that nobody pays us [the protest organizers] a penny. No one would be such an idiot as to face all this (and the fury to come) for money. We do it out of conviction, and that has a desperate power. Nor does anyone, from anywhere,  give us orders. There are marvelous minds in this country and we are already learning to debate and find consensus, without need for false shows of unity or “maximum leaders”***. What they call “alliances” is nothing more than honest dialogue involving all Cubans, without discriminating against anyone. No regime will ever again tell us which Cuban we can or cannot talk with. We are not going to reproduce their scheme of prejudice, stigma and demonization.

I am infinitely grateful for the enormous solidarity we have received. If there were justice and we had 15 minutes on national television, the entire lie that the power structure has fabricated would collapse instantly. I respectfully ask for a stop to the lynching perpetrated against any Cuban who honestly defends his principles, regardless of political color. When we say “with everyone and for the good of all,”**** we mean it.

On November 15 we will march without hatred. We are assuming a right that has never been respected in 62 years of dictatorship, but we are going to assume it with civility. Everyone will be looking towards Cuba that day. We know that the power structure plays dirty, that it gives combat orders against its own people, that it lies to our faces, that it would even be capable of infiltrating its paramilitaries into the march to generate violence and later blame it on us. Each citizen must be responsible for their conduct and defend the peaceful and firm attitude that we have called for.

November 15 can and should be a beautiful day. Wherever a Cuban lives, we know that his heart will be in Cuba. May the powerful not insist on behaving in a cowardly fashion against their own citizens. Do not repeat the crime of July 11. May officers and soldiers understand that there is no honor in obeying immoral orders. I also hope that no foreign power interferes in an issue that we ourselves must resolve with true sovereignty, that of citizens.

Let us commit to courage, dignity and frankness. It is past time to say what we think out loud.

I send you a hug.

Translator’s Notes:
*Refers to types of material help  commonly provided to Cuban nationals by relatives abroad.
**By tradition, Cubans refer to their country’s flag as “The Lone Star” (“La Estrella Solitaria”).
***Here, the writer alludes to a popular epithet for Fidel Castro, “el máximo líder.”
****An allusion to the title of a tract written by José Martí. The phrase has been deployed as a rallying cry by the Castro regime throughout its tenure.