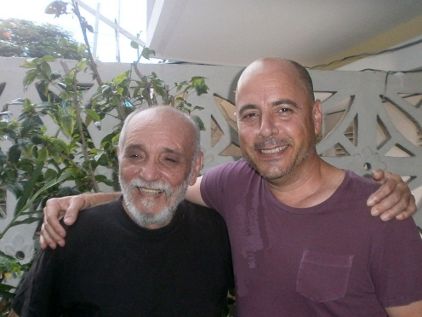 When one goes over to the “dark side of the Force,” a social radioactivity alienates many friends. It’s sad, it can even be humiliating; as compensation, wonderful people appear.

Carlos contacted me by mail just over a year ago. Through the communications interfaces of the Internet, he knew that I was married to Rafael Alcides, and wanted to write a thesis about his work. Letters went, letters came, the thesis completed, Carlos sent as an advance team his wife Lissette and his daughter Vanessa, and barely a month later, from the sidewalk, a smiling bald man, guitar on his shoulder, asking for us.

While we live ordinary lives, that of Carlos could fill several lifetimes. Rafter, convict, rogue, decorated soldier, political activists, university professor, troubadour, ecologist, pacifist. With time, as well, for five children, and all before turning fifty. Watching Alcides and Carlos converse, I thought Alcides had lost contact with a child in exile, and the exile himself had now sent this other. It’s funny how empathy can create family ties, even with physical resemblance.