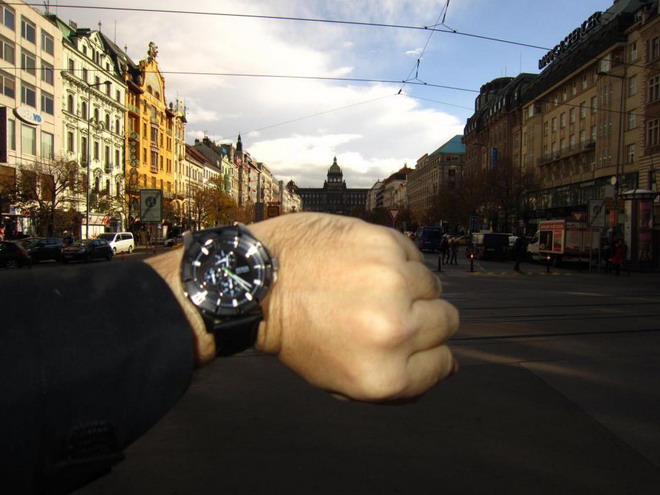 I was working as a diplomat in Paris, where I lived with my husband and baby son, who was eighteen months old, when I was faced with a problem that had to be resolved as soon as possible. It meant having to travel to Prague, the capital of what was then Czechoslovakia, to see people who could help me in this endeavor. I was carrying a letter of introduction which would allow me to stay in the residence occupied by Cuban embassy staff working in that country, whom I personally did not know but with whom my husband had a long friendship.

I was very excited about the trip since this would be the first socialist country I would come to know after my own. I got a lot of advice from Cuba’s “security comrades” in Paris about things I might encounter in the Czech capital, such as changing dollars on the black market and “other temptations.”

I arrived on August 20, 1968 at noon. I had barely gotten off the Air France plane when I was intercepted by some Czechs offering to exchange dollars but — doing as I had already been advised — I answered in Czech, “I don’t have.” This is the only sentence I knew how to say in that language.

A chancellery official and the Cuban embassy chauffeur, who were waiting for me, drove me immediately to the official residence, located in a hilly neighborhood between the airport and the Soviet residences. I submitted my letter and was introduced to the ambassador, his wife and sister-in-law, who was in Prague at the time. They put me in a bedroom — a spacious room with a bath — on an upper floor of that beautiful, old residence.

That afternoon we enjoyed an exquisite meal prepared by the Czech cook, which included, among other delicious dishes, an unforgettable salad made of raw vegetables dressed with olive oil and copious amounts of goat cheese sprinkled on top. I was told this was one of the country’s typical dishes.

As we were chatting afterwards, they warned me not to be bothered if I heard train noises as I was sleeping as there was a rail line behind the building and trains went by at various times during the night.

Although the conversation was very pleasant, I was tired from my flight and finally excused myself, retiring to my room so I could rest. Another consideration was that the ambassador and his wife also had a baby, who was only a few months old, and I did not want to unduly take advantage of their hospitality.

That night the noise from the train turned out to be truly unbearable. All through the early morning hours the constant noise from carriages travelling over train tracks meant I hardly got any sleep at all.

Very early I went into the all-white bathroom to wash up and get ready for the meeting I had previously scheduled from Paris. I was to be accompanied by the wife of the ambassador, who had graciously offered to serve as my guide. As soon as I was ready, I went downstairs and found my hostess. I smiled, said hello and told her, “I am ready now. When would you like to leave?”

At that moment this sweet-natured woman said with a certain degree of exasperation, “We can’t. We’re occupied.”

The tone with which she said this seemed a bit odd to me but, since I knew she had only recently given birth, I said, “No problem. I will just wait until you are free. It’s no bother.”

Becoming even more irate, she said, almost screaming, “No, we are being occupied by Warsaw Pact troops!”

It was then that I noticed the house was full of women and children running through the reception rooms. The nervous women were barely able to control the children. Since it was made of wood, the little ones storming up and down the wide staircase leading to the upper floors produced a noise so deafening that it seemed like Soviet tanks were in the building itself.

The cook and cleaning lady, who were Czech, understandably left for their respective homes. The question then came up of who would take charge of cooking for all these people. There were almost a hundred, including children and their mothers, whom the ambassador was housing in the residence as a security precaution. The men could be found in groups occupying various diplomatic offices in the embassy, the commerce bureau and the Latin Press.

Since no one was offering to take charge of cooking for those of us in the residence, I raised my hand and accepted the responsibility. Several of the children were still eating baby food and the family’s food supply was quickly exhausted, as were the pears and apples from the trees in the rear patio from which I made stewed fruit and jams.

The government had declared a state of siege, so we could only leave the building to look for supplies. With a guarantee of safe conduct, several people — among them two security officers and me — left to buy things at stores reserved for those in diplomatic service. This allowed me to observe the city firsthand. On top of the gray patina that socialism had been gradually leaving over time, there now stretched the the dark shadow of an invasion, saddening the beautiful, old city. The facade of the museum on Wenceslas Square was already displaying the scars of its first encounters with the invaders.

Prague fought back by covering all the street signs and addresses — as well as the bronze plaques of buildings where professionals lived — with black paint. Signs read, “Ivan go home” and “Prague, a second Vietnam.” There were exit arrows with the words “1,849 km to Moscow,” indications of citizen outrage and opposition to the occupation of the country.

Soldiers and tanks were stationed in parks and squares. Large cauldrons were hung in the middle of lawns to prepare communal meals for the troops. The city displayed its saddest face.

I was only supposed to stay three or four days, so I brought very few changes of clothes as well as little make-up or toiletries. Nevertheless, I felt obliged to use the last of these supplies, particularly hairspray, in a makeshift hair salon, which I set up myself in the main reception room to entertain women in the afternoon so that their nerves would not be on edge the entire day.

I began to fantasize that, to leave, I would have to “hitch a ride” from tank to tank until I got to the border, from where I would take a plane to France, where I had left my little son with his father, who would be waiting in terror from not knowing anything due to the lack of communication resulting from what was going on in the country.

The atmosphere was uncertain and stressful. Our situation was made worse after Fidel Castro issued declarations of support for the occupation. Up to that point, whenever we drove out of the embassy, the Czechs made things easy for us. After that, things became ugly. Our vehicles parked on the street had their tires slashed, and fruit and rotten eggs were thrown at buildings were Cubans were known to be living or staying.

There were many challenges I had to face in cooking for that many people in what was a spacious but very antiquated kitchen. There were only a few gas burners; the rest used charcoal.

A pair of male colleagues were “assigned” to me. I do not know if they were supposed to be looking after me or if I was supposed to be looking after them, but they served as my kitchen help. They were always following me, trying to figure out how I managed in the middle of all that chaos to always be made-up and ready to go first thing in the morning.

At the time it was fashionable in Paris to draw eyelashes on the area below the eye with a very fine eyeliner. I was an expert at it. They were always trying to surprise me. They would come upstairs earlier and earlier every day looking for me, but I never gave them the pleasure of catching me unprepared. This became a kind of game that helped relieve the tension. The days passed like this until the airports were finally reopened. At that point my clothes were quite shabby and my make-up supplies had been exhausted.

I remember on the way to the airport asking the chauffeur if he spoke enough Czech to stop at a pharmacy and buy me some hairspray so that I would not arrive in Paris in such a state. He very eagerly told me yes and stopped at one of the pharmacies on the way.

He returned to the car with a large gray metal can on which appeared the face of a woman whose large head of hair was blowing in the wind. He confidently assured me that this was the best hairspray in all of Prague.

After putting it on in the car, I immediately began to feel my hair being impregnated by an oily liquid with a medicinal smell. It was a hair treatment. My exasperation knew no bounds, nor did his uncontrolled laughter.

“It doesn’t matter,” I told him. “When we get to the airport, I’ll buy myself a scarf to hide this disaster.”

Once I got to the terminal, I noticed that all the stores were closed, so I had to board the plane in this condition. Once on board I was able to buy a silk scarf that cost me dearly, like everything they sell in-flight. In the tiny bathroom inside the plane I managed to cover my entire head with paper napkins so as not to ruin that precious piece of silk, signed by Christian Dior.

As I got off the plane at Orly Airport, there was my husband, holding my son in his arms, waiting for me. How I looked no longer matter. In one second the sight of them swept away all anxiety caused by the separation and uncertainty of those twenty-three days. I returned having gone through a great ordeal and having learned several new phrases in that Slavic language, which I dare not repeat here.