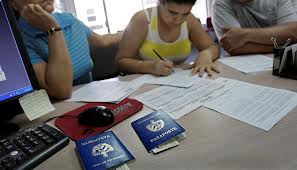 The Migration Law will show its true face. As announced, today the new amendments go into effect today.

As expected, today is a day when many Cubans who want to know new frontiers can be secure in knowing that they will not be denied in the acquisition of Cuban passport, their noses pressed against the gates of travel and migration.

People whose ideas differ from those of the Castro regime, will be the most demanding of, and the most rejected, in possessing such a document. In some cases they will obtain a passport to travel but they will have to sign an agreement not to return to their native country until there is a change of government. It is argued that they are of great danger for the government.

The Cuban passport has a very clear objective to prevent people with scientific, political, and other important interests from leaving. The government will make them suffer for their desire to learn, and they will regret having chosen their careers.

The wait for the fortunate will fall like a bucket of cold water. The letter of invitation to travel has been eliminated, but there are other requirements tied to being Cuban citizens.

History has always shown that the ingenuity is need to achieve one’s goals, optimism always helps to brings positive energy, but with this system nothing is clear, a yes is a no and a no is a no.

The territorial migration offices are never crowded and you enter them with great demand for bribes to immigration authorities.

Anyway, the truth comes to light, those mistaken will acknowledge their wrong version, but opponents of the government, they will recognized their great prediction.