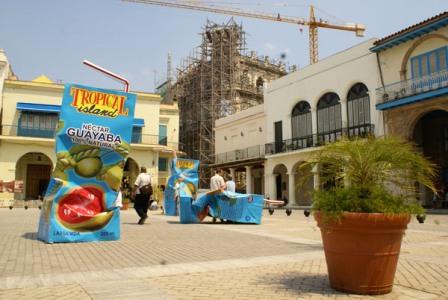 The vividly colored tetra packs with fruit juices and the striking “Tropical Island” logo have returned to the market. They disappeared for several months, while the Rio Zaza Food Company–which produced them–was paralyzed between the auditors and an exhaustive police investigation. Max Marambio, its principal partner, escaped from Cuba just in time, leaving a pending legal case behind, along with his thirsty customers.

The news of his flight was first leaked in diplomatic circles, then later in the newspaper Granma, where they practically called for the pursuit and capture of the Chilean businessman. Many Cubans knew the name of the man who, for years, was behind several businesses he developed on this Island, in a nation where still, today, it’s forbidden for a native Cuban to operate a domestic industry, import raw materials, or sell goods to foreign markets.

The man who had trespassed–with authorization–all these legal limits, was suddenly exposed before our eyes as a criminal capable of bribery, fraud, and falsification of bank and business documents. The same people who had spoiled him, granted him privileges, and fed him perks, now condemned him–in absentia–to 20 years behind bars.

His fall from grace would have reduced him to just one more name in a long list of those removed from positions of power, were it not that Marambio wasn’t just any businessman. His record in the special forces of the Ministry of the Interior, the favoritism that Fidel Castro always professed for him, and his closeness to those shot after the 1989 trial that claimed General Arnaldo Ochoa as one of its victims, made him an exceptional witness to the intricacies of power in Cuba.

When his escape became known, speculation multiplied that he might–in response to the accusations against him–narrate hidden passages in our national history, those key moments in which he participated or observed from the front row. But the convicted man has preferred to remain silent, and his single most daring statement has only deepened the mystery.

“In Cuba there is no rule of law. With Fidel, it did not exist,” he announced, once he knew he was safe from the long arm of State Security. The man who took advantage of the absence of rights to turn himself into a visionary entrepreneur in a country where prosperity is stigmatized, now confesses that he always knew of the outrages, the overwhelming megalomania of the Maximum Leader. Forgive us, but this is harder to swallow than his past-their-sell-by-date tropical juices.

He has now been tried in the capricious court of the Cuban authorities, whom he accused of malicious intent and attempts to discredit him, but it’s hard to think the Cuban people would have exonerated him. For us, he will always be someone who took advantage of our indigent citizenry, of a legal body that tied our hands, while under the protection of the government this favored younger son became a billionaire.

Marambio grew commercially here, where we natives are forced to remain stunted; he increased his capital while the entire country undertook police operations against anyone who accumulated a ridiculous amount of “wealth.” He always knew it wasn’t a fair game he was playing on our desolate national chessboard, and he knew, like the back of his hand, the privileged position he occupied because of an ideology and closeness to one man. And he also continued to call himself a “socialist” as he swept all the trash under the carpet he knew so well.

Today, after having been reviled by those who once accompanied him on his road, Marambio faces a new dilemma. Whether to write the true memoirs of what he lived, telling Cubans what he knows, or to once again–as so many times before–take refuge in the silence of the company, to camouflage himself behind the color of money.