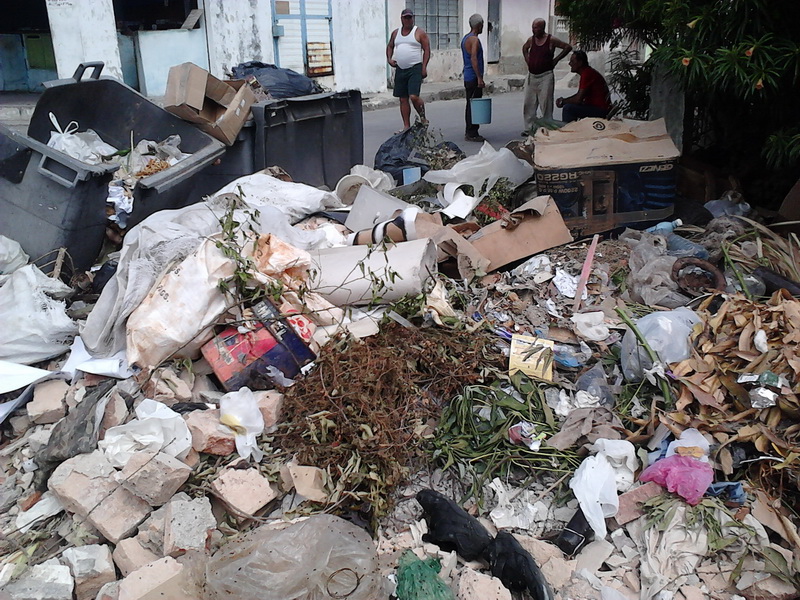 We humans produce garbage and we ourselves make it our task to collect it. In many countries, garbage collection is an industrialized process. In Cuba, however, the Communal Services Company* places containers on street corners (not all of them), where citizens discard all types of residue–paper products, bottles, food leftovers, biodegradable material, plastics, textiles, cardboard, cans, dead animals, debris, etc. — which are then transferred by tractor-trailers (these designated trucks make rounds from time to time) to the dump site.

These agricultural machines moving through the city are noisy, require the labor of at least three men–a driver, someone to get down and gather the trash bags from the containers who throws them up to a third man on the truck who arranges the bags in the trailer–and they don’t run daily.

Therefore, the garbage accumulates on the street corners like a monument to stench. Perhaps this is a strategy devised to cover up the sidewalks left broken by the claws of the front end loaders they use to clean up these neighborhood dumpsites when they grow to the size of mountains — and which equally destroy curbs, scoop up earth, and cause flowerbeds to sink into craters.

The double-speak of which the national press so often accuses antagonistic nations is the worst virus that infects the managers and communicators who are under the dome of power in Cuba. Among these there is a counter-politics of exonerating the maximum leaders — even in advance, through adulation, and just-in-case — from all responsibility in situations of any type that emerge in the country.

They practice alarmist, sensationalist and dramatic journalism when the issue is about adversaries — and another very reserved or secretive regarding our own affairs and those of countries whose presidents are our “friends.”

In such a system, where almost everything is controlled by the state, the flatterers in the media redirect blame to the people, who are the victims of the leaders’ shoddy work (or lack of work), holding them responsible for the accumulation of problems and lack of solutions — which is not, and should not be, their responsibility.

From our elders we inherited the expression, “por donde ve la suegra” (“here comes the mother-in-law”) to justify a quick and superficial clean-up of the home when we are expecting a visit from the mother of our spouse.

It appears that this is precisely the modus operandi of the authorities when they are expecting foreign guests at an event: a “makeover” for the buildings and curbs along the main avenues, with watered-down paint that will maybe last through a couple of rainstorms; a little “clean-up” to the parks over here, a little “fill-in” to the potholes over there; and later, a welcome for the visitors with much choreographed flag-waving at the airport!

Every day, in countless street corners of the capital, we see the depressing collage of unhealthiness that attests to the dirtiness and governmental apathy that surround us. It is an image that has been present for so many years in our daily picture, that many take it for granted and accept this filthiness as something normal. So much waste, grime and neglect have muddied the name of the capital so that now the assertion, “Havana is dirty,” is becoming a redundancy.