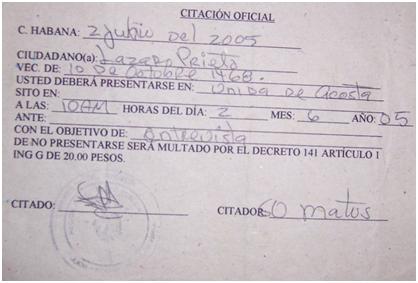 Procedural law governs, albeit sketchily, its own process. In concept, the governing body must substantiate, by its own judicial decision, before the clerk of the court, the reasons for its decision. Then the judicial officer signs and issues the respective warrant. The process should ensure that citizens are not unnecessarily disturbed.

Under Article 91 of the Criminal Procedure Law (LPP), the official citation is in effect, “not later than the day following the issuance of the decision … under which the summons is made …” This means that the first step of an authority which intends to cite a citizen will be to issue a ruling.

From the discussion in section 177 of the LPP, it is clear that the court decision taken by itself: “when the examination of a witness is urgent they may be cited orally to to appear immediately, without waiting for the issuance of the citation referred to in Article 86, with the documents themselves referring to the reason for the urgency. ”

Article 43 of this body of law clarifies that the citations are drawn up and signed by the investigator, prosecutor or all judges of the court, as appropriate, and the acting secretary. Hence the first requirement to be met by an official citation is the expression of the authority that ordered it and the signature of the secretary.

Compliance with this legal requirement is easy to check. Procedure Law, Article 35 provides that “Any writing that is made or received (in court) shall be recorded in the book by which it will take effect.” Moreover, the law itself requires that “The actions and proceedings of the preparatory phase be recorded in writing, and put into the file …” (Article 108 Criminal Procedure Act).

Conclusion: The resolution requesting a subpoena to a citizen must be in writing in the investigative record and in the book of the clerk to that effect.