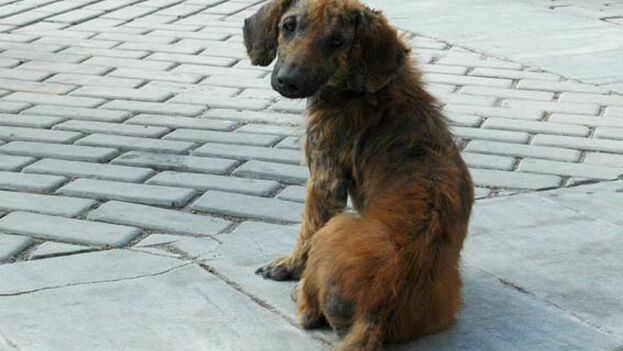 14ymedio, Yoani Sanchez, Generation Y, Havana, 17 December 2019 — He stops, takes a breath and continues to drag his stone. The pilgrim is one of the hundreds who, on Monday, started their slow walk from Havana to the Sanctuary of Rincon. They are moved by devotion to Saint Lazarus, the patron saint of the sick and the helpless. Along the way they will encounter dozens of abandoned and mistreated animals, just a few of those that inhabit the entire territory. How many of the faithful will share their bread or water with those dogs, so similar to the ones that accompany the venerated image of the old leper?

On the eve of December 17, Cuban official media announced that a bill for the protection of animals is ready. The new regulations include the criminalization of abuse, in addition to the establishment of a record of supervision and identification of pets and control over their commercialization. News long-awaited that activists have received with a bittersweet feeling.

On the one hand, after so many years of requests and demands, amplified in recent months thanks to social networks, the creation of a legal body that protects animals in Cuba is undoubtedly a victory for a group that has not only applied pressure without rest, but has also organized to alleviate the suffering of the many dogs and cats that are abandoned, ill or run over and whose lives are saved and a home found for them.

In spite of carrying out their work without legal recognition, these groups have managed to create small shelters, manage sterilizations and offer for responsible adoption countless pets that would otherwise have ended up under the wheels of a vehicle, dying slowly in the streets before the laziness of passers-by or cruelly slaughtered in the state program of ‘Zoonosis’. Now, there are hopes that independent organizations such as Cubans in Defense of Animals (CEDA) and Protection of City Animals (PAC) can take advantage of this future legal framework to carry out their work with greater effectiveness and breadth.

However, there is a reality that sours such optimism: the mechanism to prepare and pass legislation is slow, distressing and loaded with bureaucratic obstacles, while right now there are thousands of animals suffering in this country for which the new regulations will arrive too late. To this we must add that among a large part of the population there is a deep contempt for the life of horses, mules, pigs, dogs, cats and other animals that inhabit nature. Neither in many families nor in schools is there a culture that fosters respect for these living beings.

It is common to see children who, from the time they are small, are dedicated to destroying the branches of a tree without anyone calling them out on it; as well as stoning cats in the streets, mistreating homeless dogs, crushing lizards, breaking bird nests and boasting of having exterminated several frogs at once.

The violence and mistreatment against animals seen in Cuba is evidence of the dehumanization and loss of ethical values ​​that has deepened in recent decades with social experiments to create a ‘New Man’, who has ended up being, in most cases, disrespectful of nature and incapable of sympathy when a dog or cat asks “with flooded eyes for the caress of a word,” as writer Jorge Zalamea would say.

We have lost part of our humanity along the way. It shows in those who are able to leave an animal on the streets because they are going on a trip and can no longer care for it, as if a dog were a pair of shoes that when they no longer serve are thrown in a trash bin. These are the same people who leave a cat that has been with them its entire life in the middle of a field because it is old, and they do this in front of their children who, when they themselves grow up and their parents age, will want to look for a place to leave and ignore them.

A good part of the pilgrims who make their way this Tuesday, the day of the pious Saint Lazurus, who is also Babalú Ayé, will light candles, spend great resources to fulfill a promise or drag a heavy stone for miles, without noticing that feeding or picking up an abandoned dog may be the best tribute to the old man with the crutches and the mutts that licked his sores.