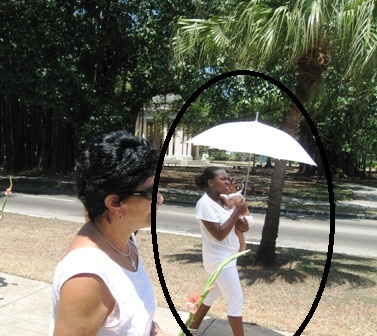 Elizabeth Linda Nanyonga Kawooya Toca, a member of the Laura Pollan Ladies in White Movement, was summoned by State Security for 2:00 pm on November 4th at the National Revolutionary Police (PNR) station at Infanta and Amenidad in Cerro municipality.

Elizabeth Linda, who is a Ugandan citizen, declared that a young man in plain clothes — who said he was an official of State Security and called himself Marcos — said that with the death of Laura Pollan and the release of the prisoners they had terminated the activities of the Movement and that he had orders from above to block the activities of the Ladies in White.

Kawooya Toca told the official that there was an official and clear commitment to the struggle and support of the Cuba Independent and Democratic Party (CID) to the Laura Pollan Ladies in White Movement as long as a single political prisoner existed in Cuba and there is no guarantee of the fundamental rights of Cubans and that she, as a deputy delegate of the CID in the Centro Habana municipality, made clear her position of support and membership in the Ladies in White. The official responded that she should leave that to the old women, that she was younger than all the women because she is 22.

Elizabeth Linda Nanyonga Kawooya Toca is a resident in Cuba and says she feels a connection to the fate of the Cuban people, she is married to the independent journalist and director of the CID Lisbán Hernández Sánchez.