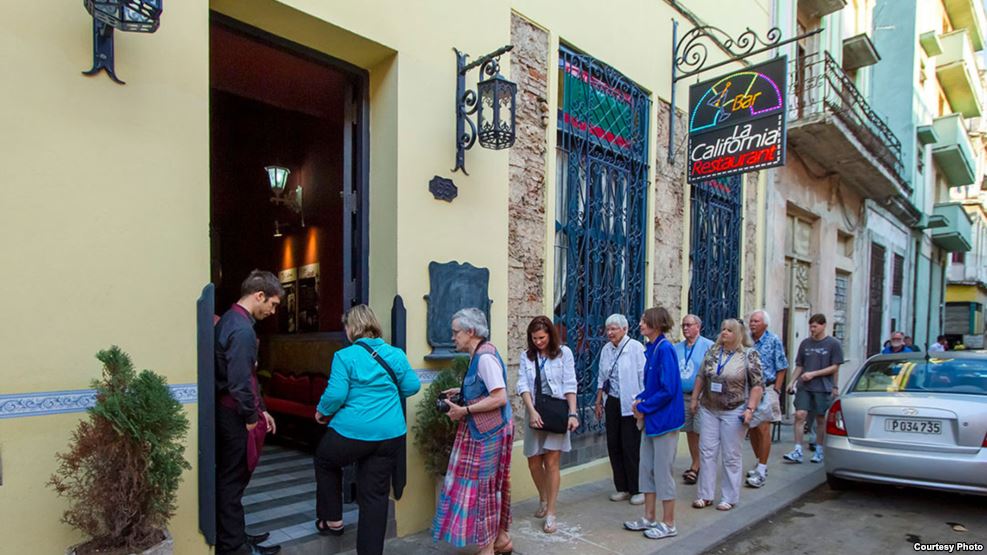 Juan Juan Almeida, 30 January 2017 — A fine that is stranger than fiction. More than 400,000 Cuban convertible pesos (roughly the same in dollars), is the astronomical figure set as a penalty for La California restaurant, a palader (private restaurant) a few steps from Cuba’s Malecon.

Established in abeautifully restored 18th century building at 55 Crespo Street between San Lazaro and Refugio in Central Havana, La California restaurant-bar offers Italian and Cuban-international fusion food, as well as exquisite service, attractive and entertaining, where the customer can enter the kitchen and prepare their own delicacy. Part of what is consumed in this agreeable place is grown on the private estate of a Cuban farmer, and the rest — according to co-director Charles Farigola — is imported.

“During the plenary session of the National Assembly Cuban vice president Machado Ventura referenced the food in the paladares, making particular note of the products offered that are not acquired in the national retail network,” began an explanation of a Cuban entrepreneur passing through Miami to buy supplies for his restaurant in Havana.

“The reality,” he continued,” is that the paladares import very little, most of the food and drink comes from the hotels*, especially those that offer ‘all-inclusive’ plans. Vacuum-packed filets, serrano ham, fresh vegetables, salmon, sausages, octopus, squid, etc. Almost everything comes from Matanzas Province, where tourism is concentrated. There are police checkpoints to search vehicles coming from the resort town of Varadero to Havana; but almost everything is transported in tour vehicles and they avoid the controls, because the national police don’t want to bother the tourists.

“The strategy, in response, was to inspect the paladares that boast about having these kinds of imported products, and La California fell. They also say that the inspection report specified that the sales report didn’t match observed reality. Parameters and factors that seem subjective.”

Can a Cuban paladar pay such a huge fine?

“I don’t think so. Look, the inspectors collect a percent of every fine they impose, and the private businesses offer the inspectors a greater percentage than they would receive. So that’s how we all survive because it’s a game of give and take.

“It could be that La California didn’t want to play this game, they could have accepted an arrangement to pay in installments, they could default and accept an ugly penalty, they may fight the fine in the courts. Anything can happen.

“No, we self-employed are not criminals, we are a social group that makes things and not communist dreams nor libertarian utopias; we are the part of civil society most dedicated to work, to generating income, jobs, and bringing money to the national economy, and even so the policy of the government is to push us toward crime,” concludes the entrepreneur before boarding his plane to Cuba, the island that, with a certain euphemism, he calls the “Barracks.”

*Translator’s note: That is, it is “diverted” (the term Cubans prefer rather than “stolen”) and sold to private businesses by a chain of state workers that can range from the highest to the lowest levels.