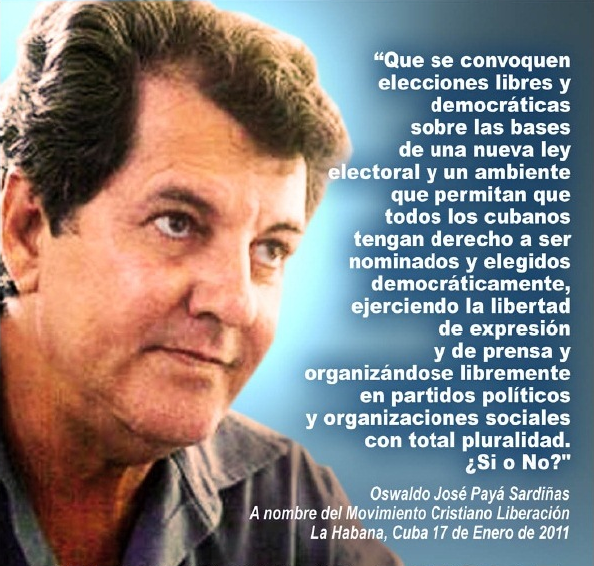 Text of quote: “Let them call free and democratic elections on a the basis of a new electoral law and an environment that allows all Cubans to have the right to be nominated and elected democratically, to exercise freedom of expression and of the press, and to freely organize political parties and social organizations with total plurality. Yes or no?”

Oswaldo Payá came into this world and left it in leap years. He was a righteous man, devout Catholic and exemplary parent. As he was also with his country and with his time and his proposal to compel change to the iron structures of the Cuban dictatorship; but in exchange he received bullying, harassment and constant threats — open and veiled — against his person and his family.

He worked for the nation and the full exercise of the rights of Cubans. He thought up and developed multiple proposals for the democratization of Cuba, which the government authorities systematically ignored for more than two decades. Is is that men who carry freedom in their souls and think and feel in a clearly democratic way, something that naturally repels tyrants.

In this year since his death in circumstances disputed by his family, small changes have occurred in the way of achieving the oligarchic objectives  and perpetuating the government. Many have stepped aside to advance and to gain ever more space for externalizing the designs of the dictatorship, and among them are the annihilation of opposition political organizations inside Cuba. The ubiquitous presence — the unseen, which is equally or maybe more effective — of Cuban intelligence, the same here as in the world, conspires to prevent democrats from achieving our goals.

Today, when many opponents and dissidents seem confused in finding the way and means to achieve the desired democratization of Cuba, the dictatorship is consolidating and positioning its family, friends, and trusted staff.

They find it easier due to the absence of a path and a common and unifying leadership animated not by the violence of the raised machete, but by the sincerity, uprightness and intelligence of a proposal for a liberating transition and real changes.

A year after the death of Payá, they continue to lack the support of the world community to strengthen our society in the search for authentic paths not vitiated by police influence. That leaves us to imagine viable proposals that are agreed and achieve international support to promote them.