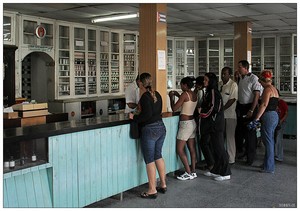 Every time that Niurka needs vitamin C or an albutamol (albuterol) inhaler for her asthma, she knows where to find it. First, before asking Fermin, a medicines peddler, she tries to get it by slipping a 20 pesos bill over the closest state-owned pharmacy counter.

If the pharmacist opens her eyes incredibly wide, it means the deal is going bad, then she goes and looks for the illegal medicine peddler. Most of the time she finds what she looks for.

Fermin works for an old and central Havana hospital’s apothecary. His salary of 300 pesos (16 dollars) a month is a joke. But with the medicines he carries out of the hospital in his backpack every afternoon, he multiplies his salary by ten.

“I use to steal vitamins, asthma inhalers and, when I can , donated foreign medicines. Also I take orders, if someone asks me for a specific medicine and it’s in stock in the hospital, it will magically disappear from the shelf,” confesses Fermin.

The public health standards on the island are lower today in comparison to the decade of the 80’s, but either way, Cuban public health is still giving a notable service in spite of being a third world nation.

But certain medicines are scarce. The Cuban government blames it on the USA embargo, which impedes Cuba from buying latest generation medicines. It may be. But in the foreign currency pharmacies you can find vitamins, antibiotics or analgesics from renowned pharmaceutical brands of capitalist countries. To make up for the medicine deficit, the Cuban state approves humongous amounts of American dollars to increase its national production

Sonia, a pharmacist, believes that Cuban-made medicines have a low quality, a good portion are also limited by a ration card given out by the family doctor or by a specialist.

Those who suffer from respiratory illnesses are the ones who suffer most. There are two classifications. Type I and II. The first ones are entitled to one inhaler a month and the second ones, to one every two months.

“Most of the time I have to buy asthma inhalers on the side, in the black market. Either by bribing a hospital employee or a pharmacist with 20 pesos, or buying from one of the hundreds of existing medicine peddlers in Havana,” Rogelio, a chronic asthmatic, makes clear.

Cuba being a tropical island, with high humidity, the number of persons suffering respiratory illnesses is significant. For this reason, all illegal medicine vendors have a guaranteed market.

Denis, one of these vendors, says that in addition to the vitamins, antibiotics and inhalers, a product with a great demand are the sanitary napkins women called “intimas.”

“Women of fertile age are entitled to buy a package of ten sanitary napkins–“intimas“–a month. And because it isn’t enough, the sanitary napkins are a colossal business. Each package is sold for ten pesos (half a dollar). Thanks to the sale of female sanitary napkins, vitamins and asthma inhalers, in the twelve years I have in this business, I repaired my room,” says Denis with pride.

Cuban health care is free and its doctors–as a general rule–have a good preparation and are committed. But when it comes the time to get a drug the patient has three options.

First, acquire in the local pharmacy the ones prescribed by the doctor, if they have it in stock. Second, if you have “hard currency,” in an international pharmacy you can buy a fifth generation antibiotic or Johnson & Johnson syrups. And the third option, buy from an illegal vendor, who for dollars (fulas in Cuban slang) will bring the medicines to your door.

Note- This article was written in March 2011, but I have a lot of articles to publish, from Ivan and other authors, and it was left behind. (TQ)