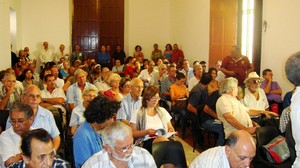 The narrow streets of old Havana are a blazing market. Past two in the afternoon, the sun doesn’t let up on the sellers of cheap goods, prostitutes in their element and old musicians looking for a few convertible pesos entertaining some chubby Norwegians at lunch.

It is a passageway of scoundrels and survivors. On Obispo Steet a line of hurried pedestrians make their way towards the cathedral. They come and go. Some of them look at the displays, pick up the merchandise to examine it and, after seeing the astronomical prices,put it back on the shelf.

A heavy-set mulatto man pants while pedalling his bicycle taxi among trash cans, people walking purposefully through the streets and badly parked trucks. He complains to himself about the heat, about having to haul two passengers who weigh more that 200 kilos and—though he does say it outright—about the rules that forbid him from operating in many of the streets in the old section of the city.

Upon arrival at the former San Carlos Seminary he looks like he’s going to have a heart attack. When he learns that in this building a handful of intellectuals of various ideological tendencies will discuss the future and democracy in Cuba, he turns serious. “I’m a neighbor of the place. I’ve never read in the newspaper that they were talking about democracy in San Carlos,” he says. These are the contradictions of the island.

The national press has not dedicated a single line to these meetings, which take place in the former seminary, now the Félix Varela Cultural Center. The gatherings are sponsored by the Catholic church, without participation from government officials, but also without harassment by the special services or verbal assaults from the system’s loyalpiqueteros, who either insult you or angrily call for a massacre with machetes.

It’s one Cuba superimposed on another. The stick and the dialog. Many wonder if in the end these debates have any practical utility. Or are mere trial balloons, where the government makes a note of the liberal thinking of some of the intellectuals in its close orbit.

In any event, the management by the Archbishopric and the magazine Lay is laudable, in the preparation and discussion of papers on the Cuba that is upon on. At the meeting on Monday, September 10, participants were given a publication that collects some essays and analysis about the future of Cuba “By a consensus for democracy.”

It was a spicy mixture. Liberals, neo-communists and exiles likeJorge Domínguez explained their points of view. For anyone betting on democracy in Cuba, these exchanges of opinion are like a fiesta.

The tone of the debate was respectful and without defamatory remarks. The terms “mercenary” and “imperial lackeys” were set aside. There were notable absences, though. The entrepreneur Carlos Saladrigas – a man with a somewhat extravagant political trajectory, which has veered from the conservative right to the center and then perhaps towards the left – did not attend for reasons unknown.

Those who have been historically opposed, such asVladimiro Roca, Elizardo Sánchez and Martha Beatriz Roque, do not often attend these meetings, which are open to all. The new breed of dissidents, among them Antonio Rodiles or Eliécer Ávila, remained silent this time.

Among the more than 170 people congregated in the room, there were only three independent journalists and two alternative bloggers. The opposition should take better advantage of the opportunities for civilized debate.

The first presentation was by a panel was made up of the former diplomat Carlos Alzugaray, Mayra Espina and HiramHermández, who discussed some of the issued raised in Espacio Laical.

There was a dialog between the attendees and five academics of varying political beliefs and representatives from the church.Carlos Manuel de Céspedes, Dimitri Prieto, Roberto Veiga, Julio César Guanche and Mario Castillo responded to questions from the auditorium.

The climate of tolerance in the old cloister left a good impression in spite of the fact that a few meters away an obese and speechless bicycle taxi driver was confusing freedom with three plates of food.

It would be very presumptuous to think that these meetings would lead to the establishment of an inclusive, open and democratic Cuba. But at least it is an attempt.