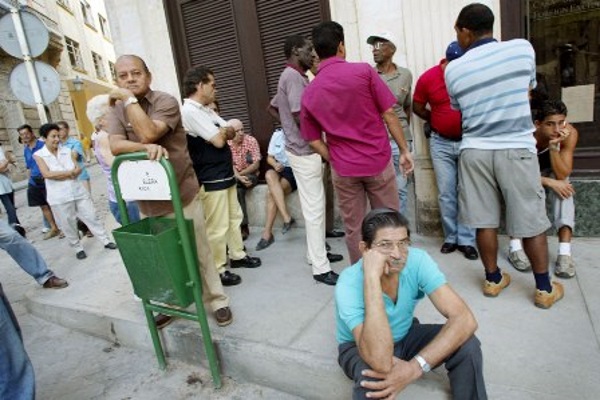 Cubanet, Rafael Alcides, Havana, 19 May 2015 – This morning I woke up pessimistic. There was no milk in the house, and the kind they sell at the “shopping” [hard-currency* store] is priced out of reach for anyone who is not an executive at a firm or who does not have relatives out there who love him very much and are well-off.** But at the bakery where I purchase the bread allotted to me via the libreta [ration book], I ran into somebody who today was more pessimistic than I am. He is a retired teacher and, without taking into account his age, one of those characters who pride themselves on being well informed told him that the ration book is about to be discontinued, that in fact it would be eliminated before August.

The teacher understands that this book weighs heavily in the pocket of the government, but he also thinks that instead of taking it away, the government should make it selective. Neither the powerful musician, nor the executive, nor he who receives remittances from abroad, nor any other characters of the New Bourgeoisie, need the ration book. The teacher, however, retired on a pension of nine dollars per month (that is, less than 30 cents a day), and with no one abroad—what would he do without this small assistance? There are just four little items that the ration book now subsidizes, but these four little items keep him from begging in the streets. The teacher spoke to me very badly of the Revolution, to which he had dedicated his life.

To console him, and because I don’t believe that, for now, the government intends to abolish the ration book—a costly burden, yes, but an even greater psychological benefit—I advised him to relax. “Don’t believe in rumors,” I told him.

“This was the only life I had,” he replied.

I let him vent.

Have you considered leaving the country?” I asked him.

“If I had someone to sponsor me*…”

I purchased my three little rolls of 20-something grams each, and perhaps because an evil shared among many is easier to bear, I returned home feeling better. On the way back I compared the disenchantment of this teacher—a fragile but dynamic man who used to dress in his militia uniform festooned with all his decorations—with the latest hobby of a certain neighbor. This is a widowed doctor who grew old dreaming of leaving the country, and who, now that he could do so without major paperwork and without losing the house he inherited from his elders, refuses to go. Neither his children nor his nieces and nephews (all of whom are abroad) are able to persuade him otherwise. Of these, one who was visiting in January, told me, grinning, “Imagine, with the remittances we send him, he’s living like a king, with a maid, lots of Viagra, and three, 20-something doctor-girlfriends to keep him busy.”

They seemed to be saying—that disenchanted teacher who wouldn’t know how to live without the ration book, and that doctor who has discovered that, with money, even being widowed and very elderly one can be happy—that the Cuban exodus would not have been so massive had the socialist government been able to provide a privation-free life for the citizen. However, the end of Pinochet, even though he left Chile off the charts in terms of a First-World standard of living, or of Franco, despite the vertiginous development achieved by Spain during the Generalísimo‘s last two decades, demonstrate that the issue is not just an economic one. As I read somewhere once, without freedom there is no lasting splendor. Nor is there ground that can withstand the cathedral placed upon it.

It has always been thus. Rome, once the ruler of the world, that mighty Rome of patricians and slaves where, moreover, the Christian was persecuted, eventually disappeared. A comparable lack of freedom ended Spanish colonial domination of lands in Our America, as well as the English, Portuguese and French. Vanished from that former America were Juan Manuel de Rosas, and Gaspar Rodríguez Francia, and Rufino Barrios and Porfirio Díaz and Gerardo Machado. In the America of my time, that America from when I was young, we saw the last of Trujillo with his braided uniform, and Somoza, and Stroessner, and Pérez Jiménez, and the Brazilian Joao Goulart, and Cuba’s Batista…

In recent times, following the fall of the Berlin Wall, the world has continued lightening up. No longer are there even Hussein, Milosevic, Gaddafi, nor now, finally, that odious fellow in Yemen. With efficiency, in each of these cases, the lack of liberty—that secret gift of the oppressed—has done its fatal deed.

I do not surrender, and therefore do not give up the dream that today or tomorrow—that is, sooner or later (and these things almost always happen when one least expects them)—I and others like me, who number 11 million, including the glum teacher from this morning, will see solutions to our problems putting food on the table—as well as the slum housing, our city falling apart, and everything else that we know too well.

Translator’s Notes:
* To obtain a visa to immigrate to the U.S., a Cuban national must have a sponsor. This page from the U.S. Interests Section in Havana explains.
** Cuba has two currencies: Cuban pesos, also called moneda nacional (national money), abbreviated CUP; and Cuban convertible pesos, abbreviated CUC. In theory CUCs are a hard currency, but in fact, it is illegal to take them out of Cuba and they are not exchangeable in other countries. Cubans receive their wages and pensions primarily in CUPs, with wages roughly the equivalent of about $20 US per month, and pensions considerably less. The CUC is pegged 1-to-1 to the American dollar, but exchange fees make it more expensive. The CUP trades to the CUC at about 24-to-1. See here a concise description of Cuba’s dual-currency system and an announced plan to unify it.
*** The average Cuban citizen relies on “remittances”—material help—from relatives abroad. A Cuban blogger explains it here.

Rafael Alcides was born in Barrancas, municipal district of Bayamo (Cuba) in 1933. A poet and storyteller, he was a master baker in his teen years. He has worked as a farmhand, cane cutter, logger, wrecking crew cook, and manager of a sundries store in a cane-cutters’ outpost. In Havana in the 1950s he worked variously as a mason, broad-brush painter, exterminator, insurance agent, and door-to-door salesman. In 1959 he was the chief information officer for the Department of Latin American Affairs in the Ministry of Foreign Relations, and spokesman of this agency in a daily television program in which he hosted and interviewed foreign political personalities. He was chief press officer and director of Cultural Affairs in the Revolutionary Delegation of the National Capitol.

As of 1993, he had been employed by the Cuban Institute of Radio & Television for more than 30 years as a scriptwriter, announcer, director and literary commentator when, at that time, he ceased all publishing and literary work in collaboration with the regime in Cuba. As a participant in numerous international literary events, Rafael Alcides has given conferences and lectures in countries in Central and South America, Europe, and the Middle East. His texts have been translated into many languages. He was honored with two Premios de la Crítica, and a third for a novel co-written with another author. In 2011 he received the Café Bretón & Bodegas Olarra de Prosa Española prize.