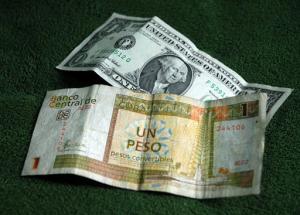 To ask for money from relatives who live in the United States of America is a constant in Cuba. Whether it is done through one of most expensive international collect calls from the island, an e-mail, or through a letter describing a string of scarcities, at the end of the missive money is requested from the relative or friend.

And from what the figures say, the request doesn’t fall on deaf ears. Something more than two billion dollars in 2011, according the Cuban economist Emilio Morales.

From 2000 until today, the income from remittances to Cuba has almost trebled. It is not only good news for the poor relatives on the island. Also for the government. With the aim of gaining hard currency, the Havana regime exploits all possibilities. From a “revolutionary tax” on the dollar of 13%, to the opening of new stores, kiosks and coffee places operating in hard currency, to offering tourist packages in 4 and 5 stars hotels to Cubans on the island.

Of course, for 70% of the thousands of national tourists who can walk along the fine sand of Varadero beach, and drink a Mojito in a jacuzzi, it is thanks to the money wired from other countries.

Not even the enormous crisis affecting Europe nor the delay in fully restarting the economy of the United States, have stopped the stream of money to Cuba from growing each year.

An economist consulted believes that, if the domestic economy continues shaky, along with the typical structural insufficiencies of the Castro system, in 2020 the figures of the remittances may be higher than those of Cuban exports, which in 2010 were 3.311 billion dollars if we give credit to Index Mundi.

To this you may add that in 2011, more than 400,000 Cuban American citizens visited their homeland. It is estimated than in 2014, this number may double and be higher than that of 900,000 tourists who yearly travel to Cuba.

For many years, in a race to collect the greatest amount of dollars, the Castro government has created a structure to collect hard currencies, inside and outside the island. In Miami, for its part, there is an increasing number of agencies that make money with abusive telephone tariffs and from the sending of money or packages through “mules” (people who travel legally to Cuba carrying goods for others).

The Cuban exiles in the United States have always laughed at the embargo. The restrictive measures to impede the regime from collecting hard currency to support still more their autocracy of 53 years, have not been effective. The Cubans living in the Florida would manage and travel through a third country or would wire the 300 dollars authorized by the government of George B. Bush.

When Barack Obama arrived in The White House in 2008, he signed a decree that would enable Cubans to send up to $10,000 and to visit their country as many times as they wish. It’s true: those two billion dollars sent by remittances have helped the Castros to maintain themselves in power. Also a part of those hard currencies are used to repress, besiege and watch peaceful opponents.

As there’s no transparency, the regime does not report what its share of the money sent by Cubans living abroad is spent on. But also thanks to these fresh hard currencies, many families in Cuba have opened small business. “Paladares” (private restaurants) in some cases; rooms for rent in their houses; or they have bought a car to use it as taxi.

According to an official statistics, more than 40% of the population receives remittances. Although there are no figures concerning this, those who receive dollars live better than those who work 8 hours and get a salary of 500.00 Cuban pesos (20.00 dollars).

But the emigrant does not only send money. Probably the value of the number of computers, plasma television sets, latest generation cell phones, medicines, clothing, footwear, food, cleaning goods and toys, among others, is between 5 and 6 billion dollars per year.

In a country where basic consumer goods, in hard currency, are as expensive as in Paris or New York, the people who receive between 200 or 300 dollars per month, are privileged.

The lean monthly basket (from the ration market) — 7 pounds of rice, 3 pounds of white sugar, 2 pounds of brown sugar and 20 ounces of beans — is not enough for the diet for 30 days.The rest of the food one has to buy at prices not subsidized or in convertible pesos (cuc), where 90% of the income from a worker is stolen.

Cuba is crowded with problems, but the worst of all is the food. To properly dress and wear shoes costs you. If you can administer it properly, the dollars or euros sent by the families enable one of these possibilities: repair the house, go on holiday to a tourist place, dance in a discotheque which charges 10.00 cuc per person, or sit on the wall of the Malecon to drink a can of beer.

“Luxuries” can be afforded only by the high hierarchy of the party, the government and the military; by managers of foreign joint ventures ,as well as the officials and employees in tourism, due to the tips, under-the-table commissions of foreign contractors and from what is stolen from their jobs.

Although that over 40% of Cubans receive dollars or euros that gives them certain economic independence (they don’t have to resort to social assistance or the scarce state subsidies), this privileged position is not reflected in a rebellious attitude toward the government, whether afiliating with dissident groups or, in the Popular Assembly, raising one’s hand to ask for the urgent political changes Cuba needs.

The fear is always waiting around the corner. And though most of the people who receive remittances are tired of such inefficient government, of bureaucracy and corruption, they prefer to remain indifferent and silent.

The future aspirations of a wide sector of the people who live better in Cuba, thanks to the dollars delivered by the “mules” or wired by Western Union, or by the euros sent through bank accounts, are to meet again with their family in the United States or Europe.

In the meantime, they escape from shortages watching the channels from Florida through the “antenna” (satellite connection, illegal), following the Brazilian soap operas on national television, drinking vodka with orange juice, and playing domino with the fellows of the neighborhood. As mental hygiene, they don’t read the official press.

Until the “fulas” (dollars) are gone. Then they phone or send an e-mail to their relatives in Hialeah. “Please, send me one hundred dollars.” But they keep silence before the government outrageous behavior.