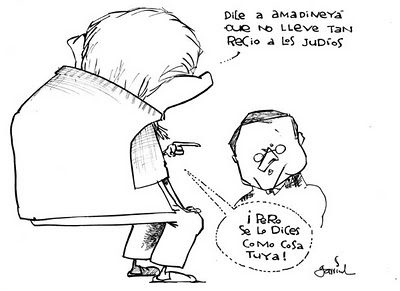 I remember how surprised I was in 1990 when I read in the newspaper Granma some of the letters exchanged between Fidel and Khrushchev during the October 1962 Missile Crisis. It was clear to me that Fidel encouraged the leader of the now extinct superpower to get ahead of their adversary and strike the first powerful blow, and he doesn’t mention the possibility of talking first. Even though he now derides the former leader of the USSR as a drunk, the truth is that the Russians handled the crisis as if it were a Chess match; trying to predict plays in advance, they obtained the withdrawal of missiles Turkey and a moratorium for Cuba. Fidel swallowed his pride and only after the fall of the sister republic has he expressed his displeasure at not being invited to the negotiating table back then. He wrote what he wrote, even if now he would like to spin it differently.

Fidel “amuses himself” seeing how the same American journalist who gave him the opportunity to reinterpret his intentions expressed in the letters from 1962, quotes him verbatim when he says the Cuban model doesn’t even work for Cuba anymore. But no, Fidel of course meant to say the opposite.

To sum up the little we know in Cuba about his interview with Goldberg, it’s possible that here in our country the capitalist model will not work as Fidel says; but I’m sure, since I live under it, that socialism, as we know it here and any other place it has been tried, doesn’t work either.