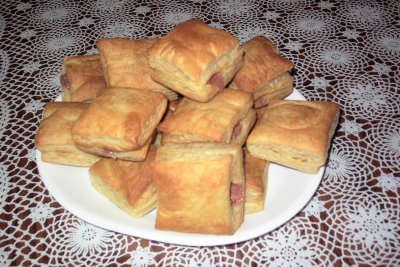 Pedro Suarez, aka “El Pantera” thought to reorganize his life according to the guidelines of the Priests of Ifa for this year. In his hands he has the brochure with the work regulations for private business. It proposes to legalize a business that for more than five years have been illegal: a small workshop for the production of guava sweetrolls.

In spite of having friends who warn him in advance, he wanted to free himself from the police reports and accusations for carrying out illegal economic activities. Until now he has never been caught, that’s why they call him “El Pantera” (the Panther), but he feels that at 50 years of age he needs to rest.

He must think of everything, for example, what to say in case the police detain him carrying more than 2000 sweetrolls. The act according to the criminal law is considered a crime of speculation and hoarding. The perfect idea occurred to him: sell orders for weddings, birthdays, and quinceañeras–girls’ fifteenth birthday parties.

“Home-based seller of prepared foods, the license that fits my needs,” he thought. Also it is the only way to distribute products in bulk without causing suspicion from the authorities.

El Pantera had a network of distribution in the city: private kiosks, Poli-cake administrators (state bakeries, that also sell their products “on the left”, that is in the black market, in Cuban Convertible Pesos), and occasionally people who resell goods in the street. All illegal activities according to the work rules for small private business.

“It’s a violation to commercialize bulk products, it’s another to do it with a state entity without being duly authorized, without a doubt it’s all illegal,” he said aloud.

While elaborating on his strategy, logic told him that he should warn his contacts, principally his small business clients, about the list of infractions. They should never say that they bought his sweetrolls to resell. Also it’s a violation to use middlemen to commercialize production. And by acting as such the middlemen they commit a violation too.

Rereading he found another problem: Justifying the legality of the materials that he uses in his business. He was obliged to buy the flour and sugar at the market in Cuban Convertible Pesos (CUCs), and bars of guava paste in the official farmer’s market. However, it was not cost-effective to buy raw materials in convertible currency to later sell his product in the national currency, or Cuban peso.

The cake, sold directly to people, cost about 2 Cuban pesos (about $.08 U.S.), he would have to declare this to be the official price. Nevertheless, he gives his product to middlemen for 1.50 Cuban pesos. If he bought the raw material at the stores selling in CUCs it would make the costs of production more expensive and force him to raise prices, in which case sales would go down.

With calculator in hand he summed it up: He had sales of 120,000 sweetrolls per month and had assumed he would invest 240,000 pesos, when in reality it was 180,000. Under these conditions he would have to declare 720,000 pesos that wasn’t entered on his assets. And if he declared that figure that they would apply a 50% tax to it.

For a week he read, reread, analyzed and formulated, but he didn’t find a way to detach himself from illegality. He would always be accompanied by the risk of being accused of engaging in illegal economic activities or of being subject to confiscation processes for illegal enrichment.

He would reach success and prosperity only if he falsified his sworn statements and bought the raw material, and the receipts for it, in CUCs on the black market. From his study of the legislation he only learned new ways to appear legal, but not how to live inside the law.

The frustration this time affected El Pantera. For the first time in his life he was ready to observe the law and he concluded that, in this country, it’s humanly impossible… unless one is willing to die of hunger.