I went shopping in search of a hoe.

Perhaps it was suddenly suggested to me by the partisan propaganda which always lays a guilt trip on the will of the majority — yeah, the runaway slaves who can’t be allowed to govern themselves — while the saving ideas inevitably fall from above, from that select club of the intransitive neurons.

Perhaps proving the burden of remorse like that state of deep coma that socialist agriculture crosses being only the fault of those who are closest to the earth, those below — as the great novelist Mariano Azuela would say — in this social pyramid where the bureaucracy gives orders.

At best I was beating my conscience, living as I had always lived in the midst of an extraordinarily fertile savannah, for not having ceded to the State my part in this social contract — not of work, but of simulation — that is summarized by a useful and popular saying in Cuba, symptom of the post-classical era or of eternal bankruptcy: “We pretend to work and they pretend to pay us.”

I definitely had never employed many hours of my life even in that metaphysical wage relation, comparable to the poetry by which the “beautiful pretense” marks the count of Salinas. I could repent suddenly for not have participated either in many voluntary working days under the precepts of Che Guevara, in search of the New Man throwing to the ground all the molds, those “Red Sundays” in which the united proletariat dispersed the fossil fuel and marched from the city to the field to get the harvest from the scrubland using the happy method of the gods Orpheus and Bacchus together: singing, dancing and drumming with agricultural instruments. 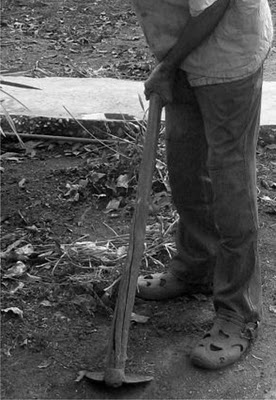 The truth is that, one morning, desiring to see what kind of means of production, specifically hoes, the governmental apparatus had put within reach of the people to make more realistic the new act of contrition to which it called the masses, after labeling them as stupid masses, whose support cost two eyes from the face: you get sick of vagrancy, indiscipline, unproductivity, and finally, being like “pigeons” with beaks always open. . . I went through the stores to see what hoe we had within reach of our wallet for ridicule our yearning for leisure.

I walked through the city with the suspicion that my search would be in vain. But, by luck, I had been mistaken. In the last establishment on my list, a little hardware store, I finally located the service of sale of hoes to the people, or better,to beexact: the sale of one hoe. There it waited, alone, abandoned. With the digits of the price it was enough to explain to me its marginal status among the merchandise, because it could barely be seen placed in a corner. It cost $22.45! Without doubt that seemed more like the number that identifies the photo of an assassin behind bars. With reason my hoe had its head down.

As is logical, I deduced that the exposed sample in the pillory of the ridiculous prices did not gather all the responsibility, it would be treated only as a sample, representing the shame of many more tools of its kind that would wait neatly inside of boxes for the return of the collective faith in agricultural work. But that clerk caught me in my error. There existed no more in the warehouse. This was the only one, or maybe, a Platonic archetype and, at the same time, its concrete manifestations: the Hoe. I wanted to make myself the discovering fool, apparently upset, if the scarcity was due to high demand, and the sharp clerk got me from my disguise with a crafty smile, telling me the price in case I had not seen it: “$22.45!” We laughed together.

No one remembered when it had arrived there, even if it was in the way among the other products, like a dead animal that would not decay, nobody claimed it but neither did the administration send it to the other world. Obviously, neither did I make a sign of paying for its rescue, because I was dissuaded by that prohibitive figure, the equivalent of more than an average monthly salary.

Hereinafter I inevitably became accustomed to visiting it each time I passed nearby, to see how it was doing. One day I asked if the price was an exclusive karma or if the ones that came later would cost the same. Of course, still no employee of that establishment could know it, first one had to begin to come out of there. One afternoon I found that they had reduced the sentence from $22.45 to $14.20. I had the slight impression that curiosity ended up acting on its destiny.

Some days and weeks have passed, the Hoe is still hanging there. Some other time I will come closer to the counter to look at it from top to bottom.

The documentary images of the great Agrarian Reform show the happy faces of those farmers with almost no teeth, almost with no speech, that raised for the first time, thanks to the Revolution (1959), a property title to the land they worked. Nevertheless, in those rural pictures of multitudes that shook awake the memory of Robin Hood, there is missinga figure just as good-natured. If the epic camera man could repeat a portrait of the same group through the years,registering the morphological changes, we would see him come out of anonymity and overshadow, each time more, the poor people who apparently disappear behind his embrace, growing fat and at the same time polishing their manners, meanwhile decking himself out with the highest technology of the bureaucracy itself, including demagoguery.He is the most favored figured with the great share, because since then it would grow indefinitely at the cost of its advantages as alegal person: the State. The Commander-in-Chief already said it then: “If they question us, what are the earthly limits of the State? We answer them: They extend from the Punta de Maisi to the Cabo de San Antonio, and they embrace the lands included between the north and south coasts of our island.”

In the end, one must ask oneself: Will there not be something working in a twisted way under the very same earth? Will there be a curse that the Utopia will return to the ideal of the primitive community as far as making the excess production rain the same over everyone, not catching, just sprouting on this coral island? In a country where the need for progress always encouraged the cultivation of the noble crust, after consummating the seizure of the map on the part of the supreme will to uphold the common good, supposedly, above all every individual interest, increasing the literacy rates, education levels and hygiene, with the result that everywhere this same social control rises to the surface in the form of a chronic ruin.

At the same time it slowed and frustrated the access of natural people, that is, of flesh and bone, the control over the means of production — with this, so individual and difficult to collectivize: a real hoe, handy, truly serviceable — and its direct benefits, the omnipresent State channeled the maximum instruments of its institutions in stimulating, rewarding, socializing other types of “hoes.” We ourselves found in a very illustrative dictionary, Popular Cuban Speech Today1 , that “hoe” is an adjective and common substantive with the meaning “sycophant” and many synonyms: asskisser, minion, bootlicker, brownnoser, groveler, flunky, doormat. There are “multiple intellectual servants” making “the protective ring of power and carrying out its orders”2 , weapons of pleasure for the autocracy, with an effect much more illusory and indigestible, parasitic, sterilizing in the long run.

These other “tools”, belonging to the sector better “read and written,” they give to themselves by the ton at every crossroad of a society whose roads all lead to State ownership and, through it, to a centralized bureaucracy. They satisfy only the high demand for luster in the social superstructure, while the economic base continues being the unpromised wasteland.