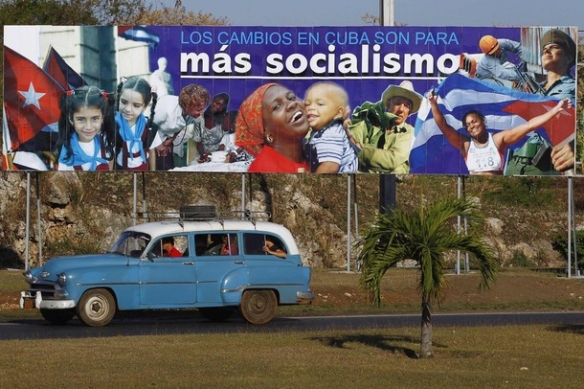 Everyone who lives in Cuba or has ever visited it knows that from one end of the country to the other, wherever you go, you will be accompanied by an army of peculiar posters. They are useless in a practical sense, because they don’t offer any in

formation. They have a distinctly ideological character and what you read on them is often mediocre and absurd.

They come in every possible size and form. And they are made of different materials, ranging from a piece of a cardboard box, to a cafeteria tray, to a huge concrete and steel structure. They are found in the doorways of a house, in any institution, on the street, or on the side of a hill 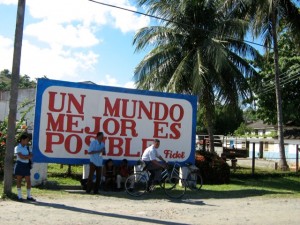 written in colored stones. The one sure thing is that they are everywhere.

Most of these posters are the work of the Department of Propaganda of the Cuban Communist Party (PPC) at all levels. To accomplish it they need material resources, brigades of men, allocations of fuel, budgets, etc…

Also working in their favor is that mass and political organizations working for the Party itself, as well as the nuclei of the PCC and the Young Communist League (UJC), are present in every workplace in the country.

Thus, it can be affirmed that, in 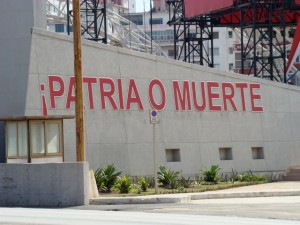 one way or another, the Communist Party is behind every sign.

What do the signs say?

Generally, they are the same everywhere. There is a basic and recurring harangue that is repeated ad nauseum. Phrases about Fidel, Raul, Che, and another collection of old and new slogans that occur to those at Headquarters and spread like a virus to every corner:”YES WE CAN,” “UNITED WE CONQUER,” “VICTORY IN VICTORY,” “THE PRINCIPAL DUTY: PERFECTING SOCIALISM,” etc… 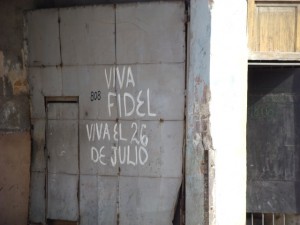 What are those responsible for the signs trying to accomplish?

They seem to believe in the influence this form of propaganda can have on people at a psychic level. They also want to give the impression to Cubans and to visitors that there is the same “Revolutionary fervor” alive everywhere. Apparently, “the people speak” through these banners, but everyone knows that no Cuban has the resources, time or desire to keep on making them.

vious purpose is that the authorities at the base of the political organization want to remain on the good side of their superiors: commonly it is more important to have enough colorful posters than to produce quality goods and services. The more billboards erected, papers printed, and walls converted into newspapers “important visitors” find in their path, the better opinion they will have of those responsible for the “directed tasks.” 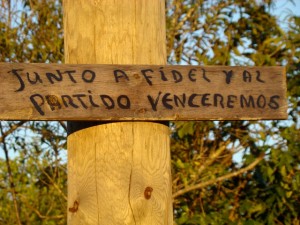 It’s difficult to determine. But it’s clear that is created certain reflexes that are accentuated and complemented using the same discourse in the media. Millions of Cubans can not count on keeping themselves well informed, and day after day they have right before their eyes a flood of posters that transmit pieces of the government’s version of the world and of what “we have” in Cuba. There must be some effect, and I don’t think it favors the individual. Wha

t clearly is noticeable is that using these messages for such a long time causes overload, stress, boredom and rejection.

Can anyone else, outside the PCC, put up a poster?

No. Not even in their own home. Only the Communist Party, which about 7% of Cubans belong to, can post this overwhelming amount of propaganda. No citizen of the other 93% can put up any sign with their own ideas, proposals or complaints without falling victim to the most important apparatus of the system, that which ensures its perpetuation: State Se 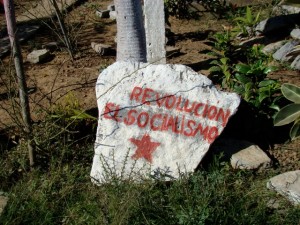 How much is spent to fill Cuba with these political signs?

We have to take into account that this country does not undertake studies nor publish statistics that would clarify, in particular, the costs of any political material. But it’s clear they are spending millions. If you were to take a trip from Havana to Guantanamo and count, one by one, the largest signs, you could see the hundreds of tons of steel, construction materials of all kinds, painters, human capital, salaries and time that have been used up over the more than 50 years of this practice. 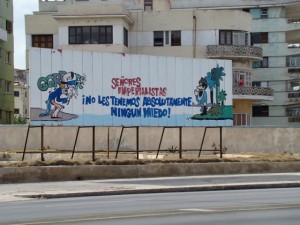 On one occasion I personally was present at the entrance to a farm that was going to be visited in a few days by members of the Politburo. They had built some 30 concrete structures with concrete panels to describe, almost syllable by syllable, Fidel Castro’s “concept of the Revolution,” so the delegation would be reading it

as their cars advanced along the road to the place. These initiatives have innumerable copies appearing in every town.

All these resources create a huge need given the critical situation of the country with regards to building and repairing houses, roads and other infrastructure of real and rational need, for which there is almost never any “possibilities” of a solution.

Have no doubt, when this and many other things are analyzed, it is as Manolite Simonet says in a popular song: “In Havana there are loads of locos.” 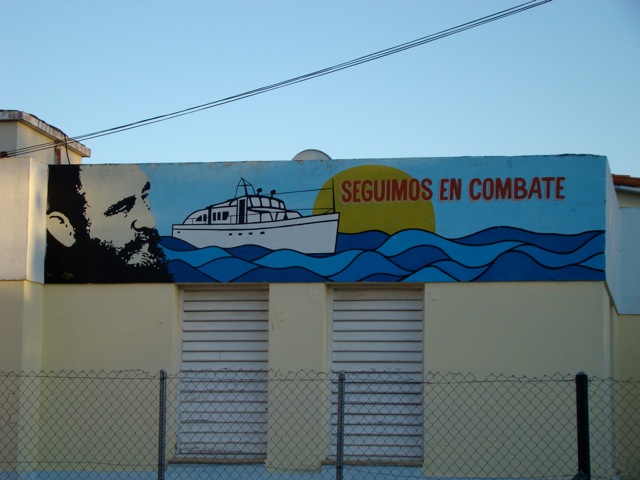 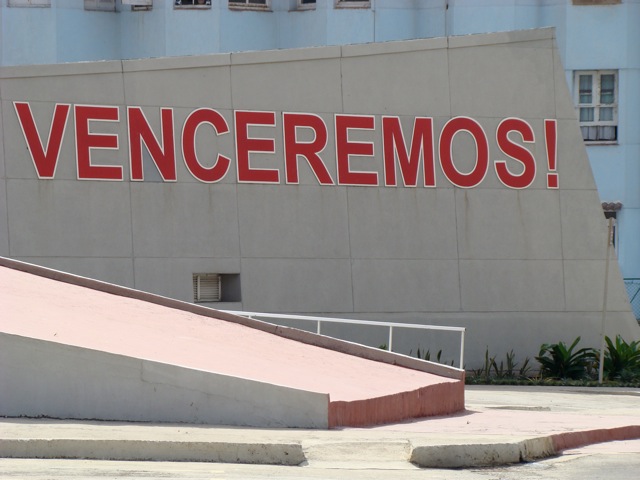