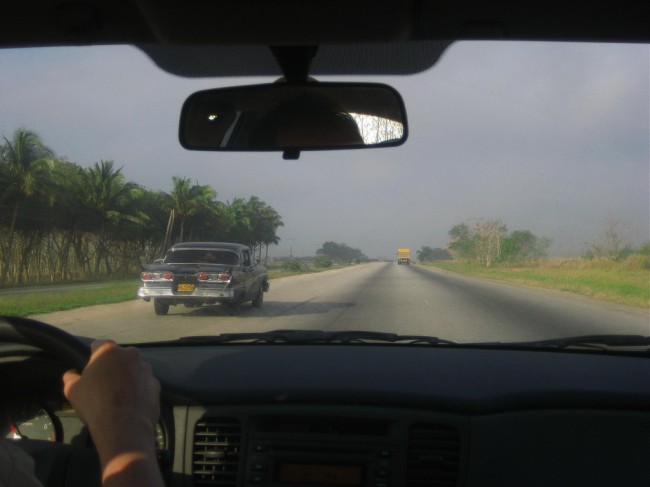 They’re like pirates on the highway. And they act with total impunity. On the stretch between Kilometer 10 and the first ring of the National Autoroute, a road with 8 lanes, dark as a wolf’s mouth and where the poor condition of the pavement makes drivers reduce their speed, it’s the propitious moment for a new breed of delinquents, known as “ninjas,” who use scooters and ski masks, to force open the trunk of a car, and, lickety split, plunder what’s inside.

Later, a car, an accomplice of the Cuban “ninjas,” collects the bags, and they divide the booty somewhere else. Their favorite target is autos rented by tourists. Fermín Escobar, 45 years old, who drives his own taxi, earning his living by charging 15 Cuban convertible pesos (13 dollars) per person, going between the bus terminals from Havana to the city of Santa Clara, some 300 kilometers away, firmly suspects that these highway robbers operate with the complicity of the police.

According to Escobar, on the Autoroute, there are numerous control points and police cars that detain you at each pass to inspect travelers’ luggage, in search of shrimp, beef or cheese, the favorite products of the people who are dedicated to the lucrative business of the black market.

“Then it’s not possible for these delinquents to carry out the robberies in peace. I have friends who are drivers, who have told me that some police alert the “ninjas” by cell phone about the license plates of the tourist cars, which are the ones they prefer. Although they also misappropriate whatever auto they suspect has valuable things in their suitcases. If the driver notes the presence of the “ninjas” and stops the car, there is a big uproar because those thieves can be armed,” reports Fermín, who counsels that the best thing to do is to accelerate as fast as possible and to not stop.

Of course the National Autoroute has a high presence of police who stop and search, at any time of the day or night, all types of vehicles, be they buses, trucks, or cars. But in spite of all these controls, there exists a hole through which “luxury” foodstuffs penetrate Havana, like shellfish and beef, which have a high demand among the habaneros.

Boarding and ransacking moving cars in the middle of the night is work that carries a high risk. It’s already known that the highway “ninjas” have an impressive dominion of scooters. For which reason the police barely detain them, and it’s a good question for the chief of the national Police. Or police ineffectiveness exists or they are “greased” with hard currency. The drivers who use the National Autoroute every day are waiting for a response.