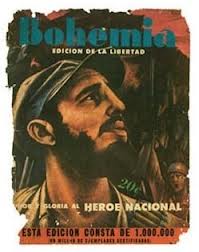 Although Karl Marx has written (and been greatly quoted out of context) that “religion is the opium of the people,” it seems that the revolutionary hagiographers, in the absence of an Earth that is “Paradise / Empire of Humanity” [1], have needed to construct a Utopian Pantheon of socialists gods who, to be revered, facilitate the passage through this capitalist Valley of Tears until the Redemption of the Humble everlasting. [2]

After the disastrous landing of the Granma, Fidel Castro brought together twelve survivors to begin the guerrilla war. They were twelve, like the apostles, and if there had been less or more, they would have had to erase them. He entered Havana in January 1959, with thirty-three, the same age as Jesus was when he died, received the palms of the people and circulated the famous cover of Bohemia magazine, with Fidel Jesus-like and at the bottom, the words: “Glory to the National Hero!” Thus begins his cult, marked by infallibility (“if Fidel knew this … but they hide everything from him…”), surviving hundreds of attempts on his person, as Daniel resisted and tamed the lions, restored the fiefdom where he was born as a sacred place of the nation, the culmination of pilgrimages. It became essentially forest, land of the caiguarán tree and a magic potion, blessed, he was invincible: “Fidel, Fidel, what does Fidel have / That the Americans can’t handle him?” The revolutionary devotees took the Sacred Heart paintings off their walls and hung his image.

The theme is not new. At the death of Lenin, he was embalmed and his restored body placed in a monument in Red Square, although he wanted to be next to his mother. Stalin, Little Father Stalin too, but he lasted only until the 20th Congress of the Communist Party, when he was buried in the Kremlin, where devotees still place flowers. The “brothers of the East” followed fashion and what about the Asian version! The perpetual delirium surrounding Mao, Kim Il Sung, Ho Chi Minh.

Ignorance is the preferred country of hagiographers. Faced with the misery that is built on land blessed by an abundance of resources, poverty which can not be eliminated because of inefficiency, corruption, politicking, nepotism, cronyism, welfarism, the squandering of wealth, education circumscribed, the repeated lie, leaving only one path: that of hopeful faith.

Hugo Rafael Chavez Frias has died. His corpse–presumably embalmed by Massimo Signoracci, who has recently been on a Caribbean and South American tour–will be exhibited for two weeks for people to see it, dream it, pray it. They say he will then rest in a mausoleum and not in his grandmother’s yard, as he wished. He is already the hero of the Fatherland and the martyr of the Bolivarian Revolution because he died from overwork dedicated to his people or from the evil wiles of the Empire or of the Right (we don’t know yet). The cancer that afflicted him wasn’t cancer,  it was another disguise of the Evil One. Nicolas Maduro is the designated disciple, the rock upon which his church will be founded.

[1] Excerpt from the anthem “The Internationale”.
[2] Sorry for the profusion of capital letters, but the solemnity required it.