The crime committed against Juan Wilfredo Soto Garcia has taken an even more treacherous turn as the assassin, upon trying to dust off another death, has used methods so low like releasing a testimony from his sister Rosa who has suffered from psychiatric disorders since her adolescence. She (Rosa) is a person that is greatly susceptible to being manipulated as has occurred in this burdensome case. Her scarce faculties even prevented her from assisting her own brother’s burial, and she only visited the funeral for a few moments because of her severe nervous imbalance. The government also exercised obvious pressures on Madelin Soto, Juan Wilfredo’s niece, and on her husband Yasmil, using the fact that they economically depend on the State. Madelin is a civil worker for FAR and her husband is a law student and both of these positions are easy targets for pressures, which in this case were successful. But in the case of these two, they did attend both the funeral and the burial. They heard my clear words when I had the opportunity to direct my speech to all those who were present as minister for the service. I publicly stated my testimony about my last interaction with Wilfredo when, after 11 am on Thursday May 5th he informed me about the severe beating he had been subjected to on that same morning. That moment became etched in history after I sent out a Tweet narrating just how dismayed I felt.

To me, what proved his statements to me was his terrible death during the morning hours of that Sunday. Although I spoke clearly at the funeral, neither Madelin or Yasmil even tried to correct me on my “errors”. On the contrary, I greeted all the present relatives with the utmost respect, and they all thanked me for the words, including Madelin. These same relatives had even agreed on having Guillermo Farinas speaking the final words at the cemetery. He also passionately denounced the situation and no one argued against him, the same way that no one forced us to leave the cemetery as they made Rosa say in regards to Wilfredo’s son. But what happened after to Madelin and Yasmil? I can’t assure it, but I strongly believe that we find ourselves before an overly vile and quarrelsome government, and I can’t blame the relatives, although I am strongly disappointed by their highly contradictory behavior.

The cowardly pressures were not exerted only on Rosa, Madelin, and Yasmil. They have certainly also tried to abuse the pain of his two children and his mother. Precisely the day prior to publicizing their macabre report, State Security called me pretending to be from a radio station called Evangelical Radio from Madrid, under the direction of a supposed Raul Gomez Echemendia. From the moment I answered I noticed the fraud and took the opportunity to tell them everything I felt and I was able to confirm their extreme worry and their greed towards the family, as they attempted to deceit me to try and get me to help them with the detestable report they were fabricating. Similarly, without any qualms they also repeatedly visited Anisley Soto Soria, Wilfredo’s daughter. Various representatives of the Communist Party, who know her through her work as a nurse, were visiting her numerous times since Wednesday the 11th in an attempt to pressure her to assist a certain event, which was supposedly a tribute for National Nurse Day which was to take place on Thursday the 12th. Of course, she did not attend. On top of ending the life of her father, they wanted to pull out some words out of her or at least get a video of her receiving some sort of diploma to try and show her in harmony with the assassin seeing as that, like everything else in Cuba, something like a simple tribute to nursing can be manipulated and used as a display of “loyalty” towards the regime.

The rest of the testimonies shown on the report were the same ones as always. People who are servile to the government and who lend themselves to play the game of the dictatorship, acting as accomplices while hiding deaths. Ex-officials from the MININT who are now retired and dedicate themselves to sell flowers are in truth personnel of confidence (PC) for the system which are placed in strategic points like Santa Clara’s Parque Vidal. Activities that are now legal, like the sale of flowers, constitute a perfect facade which keeps watch over the plazas and streets for those who think themselves owners.

But the defamatory Granma report released on Thursday the 12th further commits an even more horrendous crime, as if this felony has no limits. After citing the mentioned testimonies, they have the audacity to evoke the “guarantees of the Revolution for more than 5 decades” as a source of further proof. It would have been better for them to simply stick to trying to justify the death of Juan Wilfredo Soto, even if no one believed them, as opposed to opening that immense casserole which is full of many other deaths. 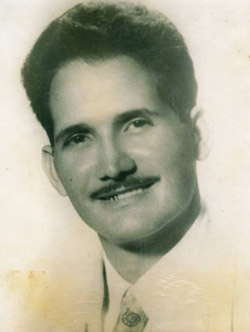 Thinking about it off the top of my head, while still horrified about the death of my friend THE STUDENT, I can quickly draw up some other examples and not of names like the popularly known cases of Pedro Luis Boitel or Orlando Zapata Tamayo, but instead some very local examples: three deaths which still await a serious investigation which would point out the true causes of those already mysterious deaths. If you don’t believe me, you can ask any Taguayabon native:

Ramon (Alo) Casas Carranza, assassinated by a bullet on December 1st 1962, although the case constituted CAUSE No. 12 of 1962 for HOMICIDE by the then Judge of Placetas. Evidently, the real culprit, who took advantage of the anarchic atmosphere, was covered up. At the time, anyone could kill someone else if they were suspected of being “counter-revolutionaries”. According to rumors, it seems to have been a passionate crime hidden behind the euphoria of the moment upon “confusing” Alo with a bandit. If the suspicions of the communities’ memories are after all true, we will find ourselves before a case where it is not only the regime which uses individuals to commit their crimes, but our history is also full of individuals who hide behind the regime to carry out their assassinations. “I’ll cover you, you cover me. I’ll serve you, you serve me”.

Marcos Pareja Gonzalez, a Jehovahs Witness imprisoned under the religious persecution which was unleashed towards this group, was one of the many who let himself die in prison from a disease, without the adequate medical attention which without a doubt caused his death. His was a name out of a multitude of many others that serve as proof of the crimes committed against this religious group, and to this day they have not returned them the list of Registrar Associations as the law states, even when the Cuban state has changed their politics to something more religiously tolerant and not because they are courteous but because they are fully aware of the criminal practices unleashed towards this group, and they know that one day this may reverse itself on them.

Jesus J. Marquez Lemes supposedly committed suicide on August 5th of 2006 while he was detained after trying to unsuccessfully (and illegally) leaving the country after various prior attempts. However, his death was never too clear. There are also some versions which say that he died as consequence of a severe beating which the penitentiary authorities quickly tried to erase. All of us who knew Jesuito know that he never let his will bend and he also did not have suicidal tendencies, and what he really wanted was to live. No one in Taguayabon believed that he died of suicide, and apparently there were also pressures exerted on the family so that they cease any further investigations.

But perhaps the death of Juan Wilfredo Soto Garcia will not only serve to unmask his individual decease, but it will also continue the persecution process of a regime that has eliminated thousands. The difference resides that in this case God allowed me to cross paths with the beaten Juan Wilfredo, thus moving me to the point where I sent out the Tweet. And the fact is that God despises lies, including the ones used by those who auto-dominate Cuba but ignore the fact that besides my being a Christian, the nearly 30 other witnesses willing to testify about the final words told to us by THE STUDENT, along with myself, are also Cuba. 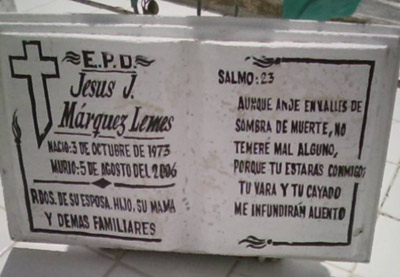 Epitaph of Jesuito in the cemetery of Camajuani where he is buried.