I. A Happy World 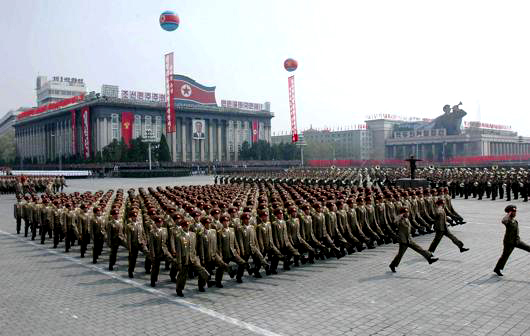 China, North Korea and Cuba, in that order, are the three happiest nations on the planet. In the “Top Five” they are followed by Iran in the 4th position, and Venezuela, number 5.

The most agonizingly unhappy of all countries is the United States, which scored just three points out of 100 in the “happiness scale.” Rather, “The American Empire.” So the land of Lincoln is called by the authors and publishers of this survey: Central Television of North Korea, which announced its lovely results during a recent visit of the illustrious Kim-Jong-Il to Beijing.

The Global Happiness index (also called by North Korean “journalists” Gross National Happiness) was published first in China on the Chaoxian site, and then spread from one end to the other of the Kim’s Korea, where it is presumed that a little more than 22 million died of hunger up to 1997, and which can boast a true first place in a ranking: that of the most vomit-inducing rigid dictatorships that humanity can conceive of today. The country where the physically handicapped end in concentration camps so as not to spoil the public adornment, and where turning one’s back on portrait of Kim-Il-Sung or his successor Kim-Jong-Il is considered an affront to be paid for in blood.

The great thing about this survey is that it puts everyone in his place. For me, nothing has so resembled Erasmus of Rotterdam’s “In Praise of Folly,” that magnificent text where it is the madman who speaks in the first person, and the reader mustn’t forget that the characters that are celebrated and elevated are, in truth, those insulted by the satire of the author.

Something similar is achieved by the “Gross National Happiness Index” of the North Koreans, who accept without question that the genius Kim-Il-Sung wrote 28,000 books in his lifetime. It puts everyone in his place: nicely back to front.

I am trying to figure out if the Cuban National Television , if the Round Table, fell for the temptation to show their glorious third place between the happier nations of the globe. I guess that mixed feelings of modesty very close to shame made them to keep a cautious silence.

When the United Nations rankings or the “Forbes” one place Norway, Denmark, Finland, Costa Rica and Australia as the five nations with the highest index of global happiness ( determined by their income per capita ,the estate of their educational systems, their environmental conditions, among many other indexes), and where “surprisingly” North Korea, Cuba , Venezuela and Iran do not appear anywhere, this list used by Kim-Jong-Il pretending to please his Chinese counterpart, and to please himself, has an insuperable value : it permits to mark on the world’s map where are the principal excretions of the universal geography.

II. Fundamental Rights Are Measured with a Ball

Ali Kafshian, president of the Iran’s soccer federation, expressed his indignation: the sacrosanct FIFA committed a despicable act of discrimination against the Iranian athletes.

Where was the derision this time? Simple: the organization governing world football blocked the women’s team from competing in an official match against the Jordanian team for one fundamental reason: the Iranian contenders demanded to play the ninety minutes in a long red-and-white dress, a scarf covering part of their faces, and as the neck would be semi-exposed — horrors! — also a scarf to avoid any affront to Islam.

But the Islamic country forgot something: the sporting rules don’t distinguish between races and religious creeds. They don’t understand extremism disguised — it’s never been said better — as pure tradition.

The regulations of the influential international organization demand standard dress, not uniforms that hide anything or with any political or religious references. And in soccer, as in life the rules have a whiff of inviolability.

The interesting thing in the case is that nations like Iran, cruelly inflexible against western customs; societies where tourist couples can’t kiss in public at risk of going to jail and then being deported, and where alcoholic drinks are prohibited to natives and foreigners alike, angrily demand that western sport institutions modify their rules and accept religious-cultural diversity as a basic principle.

One conclusion to think about: in Iran women are stoned to death for committing adultery, and live in the only nation in the world where female sexual slavery is legal. Playing football, however, is a fundamental right the land of Ahmadinejad provides women.

Shortly after a Cuban family living in Miami earns 360 million dollars selling its coffee industry to a U.S. company, the Island’s newspaper, Granma, officially announced with all its letters, that cups of coffee in the country will include fifty percent of the great darkness, and fifty percent clear grains. Half coffee, half peas.

While the business world admires the commitment, talent and future vision of the inspiring José Ángel Souto, who came to the United States in 1961 with the simple ideal of doing the one thing he knew in Cuba: selling “good coffee,” and fifty years later his children enjoy the millionaire empire created by the Pilón and Bustelo brands, the Cubans “of Cuba” suffered two agonies in one: first, the disappearance of the bodegas in this semi-vital product, indispensable for Creole breakfasts; and second: the reappearance by national decree of peas as an addition to coffee.

“The water should not be higher than the valve in the coffeemaker, the coffee cannot be compressed in the receptacle because the free space favors the hydration of the peas and it should be cooked over low heat,” Granma trained Cubans who protested, complaining not of the bad taste of the revolutionary monster, but of its danger: the coffeemakers started flying through the sky, exploding like some tropical Al-Qaeda artifacts.

And the well-loved newspaper was quick to explain, “It you read the instructions, you won’t have any accidents.” Lovely custom: in the pass, the benefactor of the Revolution, the Commander himself, spent his precious hours teaching housewives how to cook in the new pressure cookers brought from China. Now, without his High Chefness in front of the cameras, the tabloid does the rest.

Meanwhile, the name Souto, yesterday in Sancti Spíritus, today in Miami, will continue linked for life to the unsurpassed Pilón coffee, although it passed into the hands of a new empire (J.M. Smucker, maker of jams and marmalades), will not deprive the cupboards of exile of its excellence product: a coffee that even the alienated few — like me — who don’t succumb for the necromancer forces, captivate the senses with its perfect aroma.

To my friends on the Island, two details of the brand:

The guajiro José Ángel Souto, who died at age 91, sold coffee in the United States door-to-door, after convincing a U.S. roaster to allow him to grind his beans in their mills. His subsequent million dollar business arose, like the immense majority in this country, from nowhere. The miracles in this land have only one name: honest work. In a country of opportunities.

Finally: Today Cuba produces some 6 thousand tons of coffee a year. According to official figures. In 1960, the first digit was the same… with another zero after it: 60 thousand annual tons. And the newspaper Granma says that its share of peas in the morning cup should allow it to increase the price of coffee on the world market.

IV. Our Man in Bolivia

First: His indigenous status was put forward as a reason for joy, even in democratic South American countries, forgetting that is not race, ethnicity or religious creed which makes a man ideal to lead his nation. In this case, it would seem that the mentality of the statesman was secondary to the exoticism that an Aymara would, for the first time, drive the destiny of the nation. I said that to a friend, a classmate at the University, and he accused me of racism.

Second: After Evo’s victory, the cheers of Chávez, Fidel Castro and one or another semi-totalitarian specimen of the continent, were heard with an unequivocal tone of their own triumph. When the populist fauna celebrates, Latin American democrats must sit down to think.

Third: The babbling president carries the same surname I do.

But today the Bolivian journalist Alfredo Rodríguez has assembled “One Hundred Phrases of Juan Evo Morales Ayma for Posterity.” More than disgust I feel shame for an unfortunate nation which, after suffering corrupt governments, suffers today the most “out there” of possible leaders.

The poet and journalist Rodríguez has not wanted to make value judgments in its compilation. Nor was it necessary he do so. He has simply joined unique phrases, startling, astounding, of the man who leads his nation and that, as he himself has repeatedly pointed out, has received honorary doctorates from ten world universities.

The text brings together delicious “Evoisms”:

— Evo the geneticist: “The chicken we eat is loaded with female hormones. Because of this, when men eat those chickens, they have deviations in their beings as men.

— Evo the democrat: “Above the law, is the political. When some jurist tells me, Evo, you are mistaken legally, what you are doing is illegal, fine, I put to him more than its being illegal. Later I tell the lawyers: If it’s illegal, you legalize it, why else did you study?”

— Evo the clairvoyant: “Fidel hasn’t been sick, he’s just been under repair. Fidel will live another 80 years.”

— Evo the linguist: “In countries like Puerto Rico and Cuba the indigenous preferred selfsuicide rather than be slaves to the Spaniards.”

— Evo the historian: “Our grandfathers (the indigenous Bolivians) historically fought against the empire: English empire, Roman empire, against all the empires, and now we take the fight to the American empire.”

— Evo the ecologist: “In this millennium it is more important to defend the rights of Mother Earth than to defend human rights.”

I feel that had he lived today, the mordant Groucho Marx would have been jealous of the humor aptitude of the presidential Bolivian. But beyond the share of laughter our many in Bolivia gives us, his position at the head of a needy country, like few political successes, confirms a terrible reality: people in our Latin America mother continue to specialize in losing, in electing tropical dictators, emptiers of the coffers, petty charlatans, and in cases like this: the most limited politicians to lead the destiny of a humble nation.

And still many are upset because an immovably large share of the civilized world continues to look at all of us Latin Americans as a regional of eternal Aymaras.