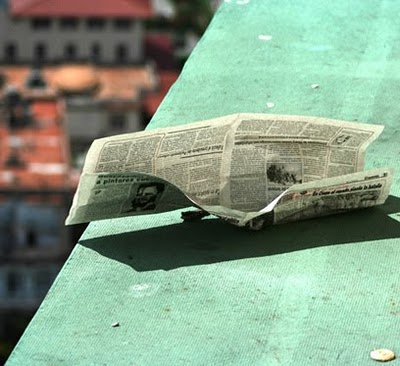 The history of Cuba told by its newspapers.

Rough leaves with ink heavier than air, but even so they all fly when the neighbors drop them from their eaves.

Skulls clenched under the shadow of these magic carpets woven with gazette paper.

It ascends on the vapor of Cuba.

Until infinity and beyond.

Smoking paradise of the proletariat.

Spontaneous acrobatics that isn’t even and is already subversive

All the Zepellins — Granma, Trabajadores, Tribuna or Juventud Rebelde: each with its archaic monotony of one color.

I saw them take off from their hangars on the rooftops.

I’ve seen them hovering for minutes or even hours and possibly months over the same swept neighborhoods of my city.

Gaseous Havana taking the shape of its container.

Village of the racing press in the free air of a tropical atmosphere, slurred.