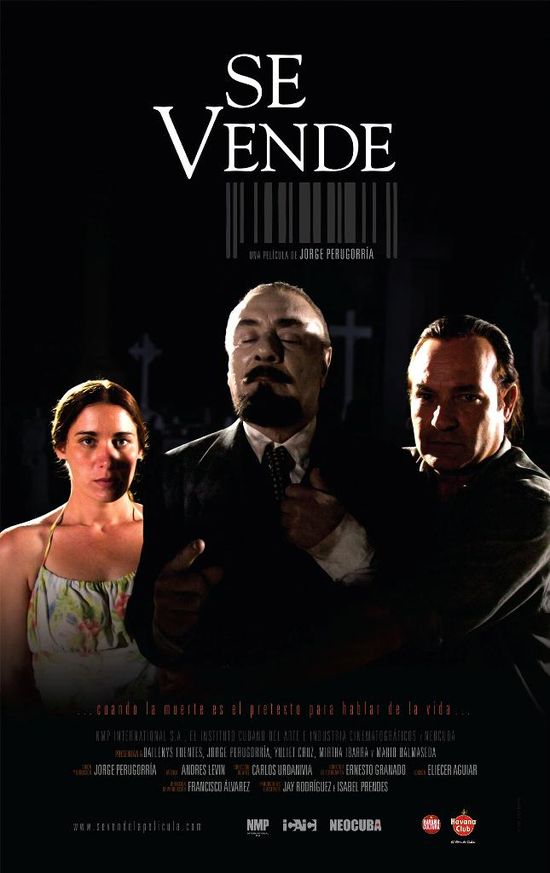 People laugh in the darkened room, the seats creak, and from the bathroom a reek invades everything. It’s nighttime at a Havana movie theater and the audience is enjoying the most recent Cuban comedy. Titled For Sale, it was directed by the well-known actor Jorge Perugorría and has already been shown in an extended series of openings. A controversial film that provokes laughter on the one hand, and fierce criticism on the other, it has its favor that it doesn’t leave its viewers indifferent. Either they laugh with pleasure, or get up in the middle of the screening and leave. Such reactions are also symptomatic of how we Cubans respond to certain issues, work and people. We tend to love or repudiate; to applaud or reject, with no intermediate points.

This is a humorously macabre story, with dead people who must be disinterred at the cemetery in the middle of the night. The script takes us by the hand through the absurdity of a reality where the sale of a tomb and the bones sheltered within it is the only path to financial relief for a young professional. For Sale unwinds in an also cadaverous Havana, a city of faded houses with balconies on the point of collapse. It presents us with a society where scruples and urges give way before the imperatives of survival. A wake-up call about the ferocious pragmatism that invades us, leaving nothing safe. A metaphor, perhaps, of a time in which the past is viewed with irreverence and a desire to liquidate it, by we who live in the present.

In its favor, the movie also makes several references to the classics of Cuban filmography. The well-known game of mirrors — the film within the film — amplified and referenced. An explicit tribute to Tomás Gutiérrez Alea (Titón) and Juan Carlos Tabío. The Death of a Bureacrat, For Trade, Strawberry and Chocolate, are some of the films referred to throughout the movie. However, some of these references pass unnoticed by a large audience, one that younger or less versed in national cinema doesn’t know its antecedents. Rather than a difficulty, this lack of reference points allows another way to understand the story being told. If the script wanted to turn these hints into evocations, they’re left for many as events at the same level as others. The trick of the lens looking into the lens needs an aware viewer, otherwise it’s seen as one more point in the story.

And then came the actor…

The figure of the director also cast as one of the protagonists is something new in the cinematography of the island.

Few native directors have alternated between both sides of the camera. In For Sale, the union of these roles doesn’t occur in the cautious manner of Alfred Hitchcock, where we see, for a few seconds and in the shadows, his chubby profile. In this case the spectator senses that the character of Noel recalls, too much, the actor who plays him, perhaps because his designer and interpreter are the same person. It is clear, however, that the entire filming must have been like a huge party for all the participants. To the point that at the end of the filmstrip it rushes to conclude in a great celebration where it seems to offer a solution to all the problems. An abrupt and often repeate, closing in Cuban comedies, that bore more than entertain.

If you have to sacrifice the dead to feed the living…

Beyond the pitfalls and limitations of For Sale, its main achievement is to convey a message of particular importance for Cubans today. Filled with laughter, the myths of the past are picked apart, yesterday’s buried bodies are liquidated. The dead stay dead and serve only in regards to the imperatives of the living, every minute of the film seems to tell us. The corpse of the protagonist’s father, an ideologically inflexible man, at the end of the reel is a mere mannequin in an exposition. Played by the actor Mario Balmaseda in the manner of a rigid Lenin, index finger raised, this character embodies the political leaders whose old-fashioned speech provokes laughter more than sympathy. Leaders and ideas in liquidation once their time is passed; the stark conclusion of this filmstrip.

I am among those who stayed until the final minute of Jorge Perugorría’s film. I laughed through several of its scenes and reflected during others. Despite my own objections and criticisms, I preferred to find its nuances and intermediate points. I gave it a chance and I think it was worth it. Because through its 95 minutes, the script reaffirmed an idea I have pondered for years: no one can bear so much past, carrying on their back the weight of all the deceased. A nation is not a cemetery where the living must comply with the designs of those who are gone. The same thing ends up happening to political last wills and testaments as happens to the bones in the film For Sale: they are auctioned off for the imperatives and pragmatism of now.