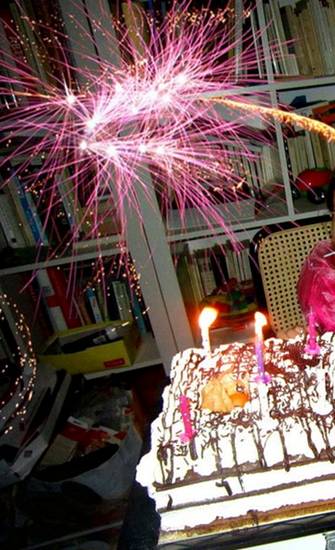 I have come to visit my friend Lisa, whose daughter is twenty-seven and pregnant. She tells me she is going with her to “González Coro” Hospital, formerly the “Holy Cross” clinic. After listening to me talk about the avalanche of this year’s anniversaries and commemorations, she says it would be a good idea to add to the list the water leak that has been present at this facility ever since she was expecting her daughter. At first they put a metal bucket under it to catch the dripping water, she says. But the leak is still there — though in the interim it has become more like a waterfall — so now they have a big plastic container to catch the “precious liquid.” However, from time to time it overflows and spills onto the granite floor over which the expectant mothers walk, putting them in danger of slipping and falling.

The fake roof in the area of leak has rotted from moisture and is coming off, but this does not seem to trouble anyone. When they can no longer use the space for medical exams, they will close it and later the entire hospital, as was the case with its counterpart, “Clodomira Almeida,” which has been in total ruins for years, as well as “Maternidad de Línea,” which is also closed, to name just two examples of this type. This leak is now as old as my friend’s daughter, twenty-seven years and counting. Like the Puerta de Alcalá,** it “watches time go by,” faced with the indifference of the hospital director, the medical personnel, the Ministry of Public Health and even the patients themselves. Will this be yet another curious anniversary to celebrate?

Translator’s notes:
*Isla de los Pinos is the second largest of Cuba’s islands. Its name was changed in 1978 to Isla de la Juventud.
** A well-known traffic circle in Madrid, marked by a triumphal arch.