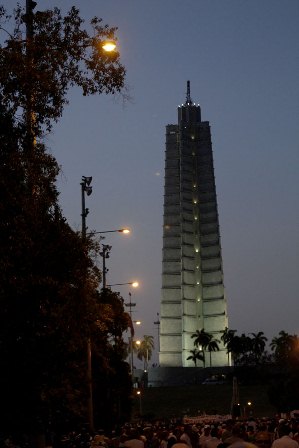 My blog is running a week late. So I can’t put up the post of my experience of the Pope’s visit in ral time. I understand that he will arrive in Cuba on Monday, I think his plane will land at Santiago and on Wednesday he will celebrate Mass in the same plaza where that people have applauded the scaffold. I will not go on that occasion.

I am 35, and now in control of most of my decisions, perhaps I am no longer a plaything in the hands of Fate. I don’t know. But nothing tells me this year that I should be there, However, moved by strange tides, I was present in that Plaza in 1998 — without managing to see John Paul II — holding one of those poles attached to a large cloth that read, “With the Pope and the Church for a plural education.”

That was random, I was the girlfriend of a boy who had Catholic friends. I still had not come to this temple of St. John Lateran, where without haste, in this mania of mine to inherit the luxury of time, I wanted to believe that it would happen with me as with St. Augustine, who was stripped of all his heresies in that definitive “Take up and read.”

It happened to me listening to the liturgy of the Eucharist, beautiful, distilled over the centuries by the Fathers of the Church, pearls, And I decided to give myself the gift of being baptized at 26 in the name of the Father, Son and Spirit. But this year I’ve been tempted, as I will not go to the Plaza, to put it to the test by asking one of the Dominican priests who officiate in my community of I can make a poster like that.

For that I could bear that babbling morning I left at dawn, I still remember it, the Carmelo de Linea, made by the youth of that time with the blessing of those protesting priests. Now it is different. Sometimes it is better to preserve enmity, or at least to maintain your belligerence and not give way until you have reached the satisfaction of your just demand.

At the time when the Church of Roma, my Church, behind closed doors has made a pact of friendship with the dictatorship, there will be no posters, no fabric, no songs of epiphany.

*Translator’s note: “Plural” in this post is in regards to allowing Catholic schools.