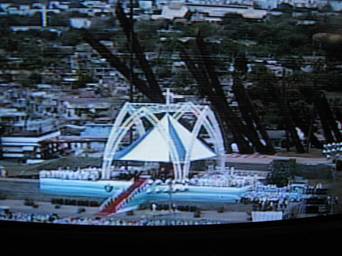 Observing the chapel installed in the Antonio Maceo Plaza in Santiago de Cuba, accompanied by the aggressive machetes raised towards the sky that make up a part of the monument to the famous equestrian statue of the Mambi General, I think, perhaps, was not the best place to celebrate a Mass: it projects too much violence and spirit of war, valid in the era of the general, but anachronistic in a time when the mood is one of peace, love and moderation. Raised machetes rather represent a threat, like the famous sword of Damocles, especially whenlately some inflamed young people have been launching cries of “Give them the machete, they are few,” to repress peaceful opposition.

These plazas, were built in the last half century in most provinces and many municipalities, warriors all, respond to the old totalitarian megalomania that concentrates and marches the masses in front of their leaders, situated on elevated stands (do they have something to do with Mr. Olympus?), making them false substitute for parliaments, assemblies and other democratically elected institutions, which should discuss and approve or reject all laws affecting citizens.

I think the warrior exception is Havana, built but not completed before 1959, where a meditating Marti looks out over the immense and boring arid surface in front of him, that should be planted with trees and adorned with fountains and walkways for the recreation of Havana’s residents, as planned in the original project. 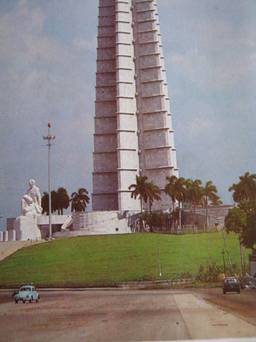 It also become a plaza for rallies and parades (at one time also served to honor brother leaders but today there are not so many brothers), has been framed for some time, bearing the images of Che and Camilo on the facades of two government buildings, who will observe the Pope from eternity when he officiates at the Mass and addresses to the audience.

Che, eternal atheist, perhaps will look away, disappointed that the Cubans have become so religious. Camilo, without the physical time to officially define his faith, can keep his eternal smile, like the good-natured Cuban he always was, and he can even offer a knowing wink to the image of the Virgin of Charity, temporarily displayed on the facade of the National Library: in short, her brimmed hat looks a lot like the halo of a saint, especially at night when illuminated.

Fortunately, they no longer build plazas, their principal user being physically impeded. So many materials and efforts falling apart over the years, could have been better used to repair buildings and construct housing and other buildings, which would have prevented or at least ameliorated the disastrous situation existing today.

Some not too distant day, earlier rather than later, some sill be forgotten and their spaced transformed into beautiful parks and promenades. In sort, our real heroes, starting with Marti, never needed them: for them the collected parks and people of our city were sufficient, where they will always be remembered.

They may have busts or even statues of eminent and important teachers, doctors, architects, scientists, lawyers, artists or athletes, both men and women. In short, people do not live by warriors alone!