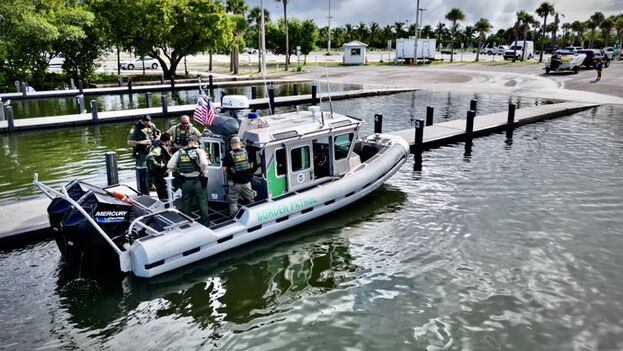 EFE (via 14ymedio), Havana, 7 January 2023 — The governor of Florida, Ron DeSantis, signed an executive order on Friday that allows him to mobilize National Guard troops and allocate new state resources to face the migratory wave of Cubans and Haitians that affects the southern part of the state, as well as “to help relieve the pressure on local resources.”

The executive order will allow the state to “deploy aerial assets, including planes and helicopters of the Florida National Guard,” says a statement from the governor’s office.

The measure aims to “strengthen the marine patrol of the Florida Wildlife Conservation and Fisheries Commission (FWC) to support interceptions” at sea and “ensure the safety of migrants trying to reach Florida.”

DeSantis, a Republican, argues in his executive order that, in the first two months of the current fiscal year alone (beginning October 1), the Customs and Border Protection (CBP) has arrested more than 460,000 people trying to enter the country through the southwestern border.

The governor’s order was given one day after the United States announced a new immigration plan for undocumented immigrants arriving in the country by land.

President Joe Biden said on Thursday that Mexico has agreed to admit 30,000 immigrants a month from Venezuela, Cuba, Nicaragua and Haiti after they are expelled from U.S. territory for irregularly crossing the border.

“My message is this: If you are trying to leave Cuba, Nicaragua or Haiti, do not show up at the border. Stay where you are and make the request legally,” Biden said.

However, the announcement does not detail the situation of Cubans and Haitians who arrive by sea in precarious boats and who, according to Florida Senator Marco Rubio, have overwhelmed the state’s resources.

In a letter, Rubio requested support from the federal government on Thursday in the face of the massive arrival of immigrants in south Florida, especially along the coasts of the keys of this state, which in the last three days has surpassed 1,000 people.

About a hundred Cuban migrants arrived at the Florida keys in just 24 hours in makeshift boats, thereby increasing the number of undocumented immigrants on this territory, the CBP reported on Friday.

There are 606 more who have been intercepted at sea by the immigration authorities, according to figures released by the Southeast National Security Task Force (HSTF-SE).

Also, the arrival of 364 immigrants last weekend at Dry Tortugas National Park forced its temporary closure in the middle of the holiday season in order to facilitate the work of rescuing the people stranded on the islets.

The immigrants, mostly Cubans and Haitians, arrived on multiple and precarious boats on several islands in the Florida Keys archipelago, in Monroe County, the extreme south of the United States.

Walter N. Slosar, head of the Miami Sector of CBP, said in a recent statement that since October 1, 2022, the sector has experienced an increase of 400% in people arriving by sea, who are arrested upon disembarking.