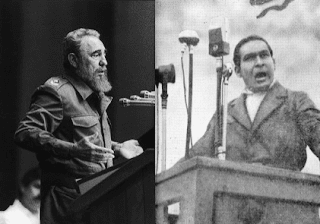 The Cuban dictatorship criticizes the possibility offered by the U.S. government of accepting Cubans who cross the Florida Straits in a bid to achieve their dreams. They write lengthy manifestos to disguise the reality of the island, and blame the ones who suffer the problem. Which means looking at the result and forgetting the cause.

Of course, who in Cuba would question this required view of the problem? Who would dare to question the “cause” when no name other than the Castro brothers can come up? What have they done with this country? Where is the success at the cost of the slain under their orders? What is the price of human and material losses in the last 50 years? Why does Fulgencio Batista now not seem so tyrannical? Who took charge of surpassing him, to be a more extremist dictator? Who filled the prisons and shot the young people who were dissatisfied, desperate, dissident, and every one who opposed them? How many years in prison did they get for attempting to leave the country illegally? They punished them with the same sentence imposed on Fidel Castro for attacking the Moncada barracks in Santiago de Cuba.

In 1967 my godfather received a letter from a cousin in Miami, trying to convince him to emigrate with them, and in which he warned that a government like Fidel Castro’s could become a communist and totalitarian one. They arrested him and sentenced him to 10 years in prison, which he served to the day. They had opened his letter, which he never received. When he came and saw me after almost 11 years, he started to cry for all the time lost unfairly. He hugged my mother, and pleading with his gay gestures, said he never wanted to see a man at his side again. He spent 10 years of being used by the beasts, he told my mother in the middle of crying.

Who has been more of a dictator, Batista or Castro?

We know, according to the story that they told us themselves, that the Batista government abused, tortured and secretly killed the young people, then left them lying on the roadside. Which we considered horrendous. But didn’t Fidel Castro shoot them in front of people?! Desperate young people who tried to steal a passenger launch in the bay of Havana to go to Miami in order to work, to fulfill their dreams that were more urgent than a “revolution” that didn’t know how to support them? And who were deceived, after being stranded at sea for lack of fuel and being towed by the Cuban Coast Guard to the Bay of Mariel and negotiating with the authorities, who spoke on behalf of Fidel Castro, after being guaranteed that nothing would happen to them, and if they surrendered, in exchange they would receive a minimum punishment?

Their own companions in the boat, among them foreigners who testified that they were not mistreated nor did they understand that their lives were in danger at some point, even if things were tense, asked for leniency for the young men. But they were executed in front of Cuba and the world. Without a trial. Hours after their capture. They waited for their mothers to leave to get clothing and toiletries for them to clean up, and before they got home they were informed that their sons had been shot by strict order of the State Council. Of course, Cubans remained silent, and some intellectuals and artists were left with dirty hands, so much so that not even their own poetry will save them from Hell. And all because of cowardice, by thinking about their own welfare. And now they repeat like parrots that they had to do it because there was a real threat that the U.S. fleet would invade Cuba, to complete the practice of violating the sky and waters. That has never been proven. But if it were true, it still would have been murder. They did not think about their children, their grandchildren. Would they have done the same? Surely not.

Intelligence at the service of mega-malignancy

We can’t deny that Fidel Castro has been of uncommon intelligence, only that he used it for personal gain, and for family purposes. Others would say in the service of the Devil. But what would have happened if Fidel Castro had done what he promised from the Sierra Maestra? If he had fulfilled all those dreams of a better Cuba, without departing from democracy and the principles of the most advanced civilization? Perhaps he even would have accepted, in the style of King Juan Carlos of Spain, being the Supreme Commander of the Armed Forces of Cuba, but without intervening in the affairs of state. Alone he could have been in charge of a human revolution, destined to improve the lot of all Cubans, regardless of race, creed or political affiliation.

But those who have a bit of common sense know that Fidel Castro would never have been satisfied with ​ overseeing the rules and rights of the Cuban nation. He wanted more. He always wanted more. In fact, he left Cuba — too small, like Cinderella’s glass slipper was for her sisters — and began looking for expansion in other continents, so that he forgot about Cuba. We alone were the means of sacrifice for his mega-dreams, his mega-revolution, his desire to be a mega-president, a mega-leader. To this he dedicated his life, trying to hoodwink us in his delight with words of principles and tenderness, to deceive others and add them to his purposes with patriotic, heroic, “internationalist” locutions. Fidel has served as a great magician of the word, I always picture him blowing a flute to make the snake dance, and in this case the snake is in the mirror, it is his own image that dances with his own interpretation, hence the great trick that he has exercised for over half a century: “the enchantment.”

And many fell asleep under his enchantment, are still sleeping, the minority, because the majority feign sleep, but it’s nothing more than fear that keeps them pretending compliance with the orders of the magician-dictator.