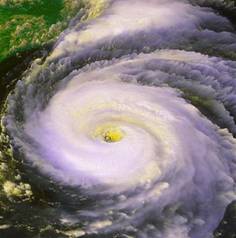 Hurricane Sandy crossed the eastern region south to north, leaving a trail of destruction and death, mainly because of the fragility of the houses and facilities and their lack of maintenance and improvement over a period of decades. They were sad days, but luckily we got rid of the usual political, ideological and patriotic tirades around this type of atmospheric phenomenon, common in previous years. As joy must prevail, even in misfortune, I propose this fictional chronicle for today, Sunday, the style of which appeared previously.

The enemy, begotten, trained, armed and directed by the Empire, Category 2, with winds of 150 kilometers per hour, in the October rain moved sinuously toward the impoverished Haiti, and masked in moonless nights and protected by thick curtains of rain, moved slowly toward the southern shores of the eastern Cuban provinces, presumably unguarded.

Our patriotic and sagacious observers, with foresight situated on the heights of Picos Cuba, Suecia y Turquino, and in the beautiful and idyllic beaches, tirelessly and without sleep, firm in honorably fulfilling their missions, automatics on their shoulders and binoculars to their eyes, trying to detect and thwart the invader’s dark intentions against our indomitable and noble working people, our elders, women and children.

But he, the monster traitor, coward, petty, antisocial, dissident and annexationist, hidden, as only those without honor are, attacked unexpectedly, sending gusts of wind and rain and, despite stiff resistance from militiamen and villagers, supported by unbeaten and gallant military units, destroyed shacks and huts, the poorly constructed roads and embankments and the poorly tended crops that had been sown after more than fifty years of enormous sacrifices, pain and tears, in the titanic task of building a country and a better world.

Then, in an unexpected move, turning his ideology to the right, he was deeply conservative, and entered the national territory without authorization or visa, illegally and arrogantly, treading with his filthy putrid winds and waters the sacred space of the redeemed Fatherland. He progressed, striking right and left, supported by lying propaganda and the manipulations of the Empire and its minions at home and abroad, despite the Televised Roundtables, newspaper editorials and a wise and great defense organized by our authorities, who bravely tried to stop the passage of the invader and to destroy him in the most colossal meteorological battle known to mankind in all its history, but it all proved unsuccessful.

The fascist freak of nature, criminal and genocidal, alien to the most basic human feelings, continued its predator’s advance, trying to trample our national honor and to shatter our sovereignty and independence as well as to shred the glorious national flag and break our indestructible Latin American solidarity. The murderer, as bloodthirsty, as the rulers he served, continued lacerating our meat, though at great cost, to the extent that, cornered between Gibara and Holguin, beaten everywhere, sore and pleading, he was forced to leave the country without even getting bronze medal, after hours of hard fighting.

As always in difficult situations, our invincible people grew and, in one go, under one will, gave the wily attacker a lesson that surely he will never forget. So the enemy is treated in this land of freedom, no matter where he comes from and who arms him.