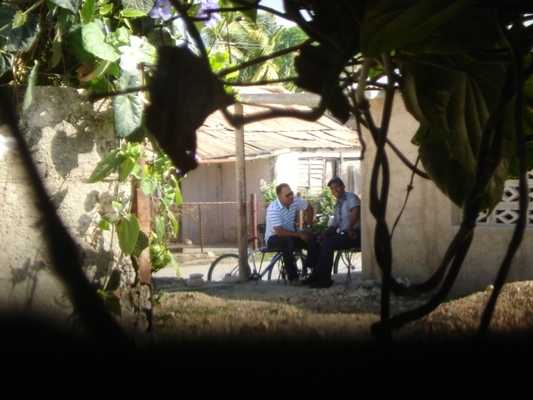 My telephone battery runs down twice a day. Every three minutes I receive local calls, which, of course, I don’t respond to. On occasion, when I have responded I have received insults, threats, and attempts to destabilize me. As for the usual restrictions which the repressive forces exercise against me, we now see the shady complicity of the Telecommunications Company, together with the vandalism of the G2 official, Saul Vega, and his assistant, snitch, and fellow rat, Maikel Rodriguez Alfajarrin (shown in the photograph with the striped shirt).

Rodriguez Alfajarrin is the Chief of the Confrontation Brigade in the Municipal Housing Unit of San German. His job consists of detaining those who rent out houses illegally, carry out construction without permits, and those who buy land, or transfer it from one family member to another to avoid turning it into the state. Among the informal accusations of the citizens, which in the end turn out not to be very well heard, is the statement about the high standard of living of the state inspectors, which receive a hefty salary.

Their repressive job also consists of harassment over the phone. In fact, I surprised them in such an act when, this past Wednesday, they called me from a public number and I searched the last two missed calls, later calling myself from that telephone to prove it was them. Cynicism and shamefulness. A supposed official acting like a midwife, lingering around at home all day paying close attention to all the details of the lives of those who surround her.

Thanks to CUBACEL, more than 15 cellphones ceased working at the same time on Sunday, the 31st, when they were beating the dissidents in Banes, along with Reina Luisa. In the same vein, this past weekend my cell phone’s text messaging and twitter service stopped working yet again, ever since Friday. On the screen of my phone, it read “limited service.” Caridad Caballero Batista, an independent journalist in Holguin, filed a complaint at the ETECSA Territorial Manager’s Office.

The young ladies from the CUBACEL customer service department, especially Niurka, jumped into a real tongue-twister. She kept going back and forth while I was asking about the connections between the political police and the company she worked for. She asked me if I had perhaps dropped my phone, and I responded that the only time it got hit was when two technicians, working in the service of the G2 at the company she works for, decided to mess with it.

Now, such an outrage has gotten even worse in regards to all the thefts committed to Rolando Rodriguez Lobaina, Jorge Ceballos, Nestor R. Lobaina, and many others. Their phones have not been given back to them. Caridad Caballero herself, when they confiscated her phone, went all the way to the commercial office, once again reporting it as lost — and that was it, everyone went back home as if were nothing.

The G2 steals our phones while CUBACEL sells you connection lines again!!!!

Temporary suspension of service lines, harassments over the phone, offensive messages being sent from unknown numbers, confiscation and breaking of cell phones, restrictions on sending out international messages, and the prohibition of being able to receive “re-charges” from abroad. These are just some of the obstacles which a business with double-moral, such as ETECSA, which relies on investments of Mexican, Italian, and other capitals, offer to their customers, all the while abiding by the rules of the olive-green leaders.