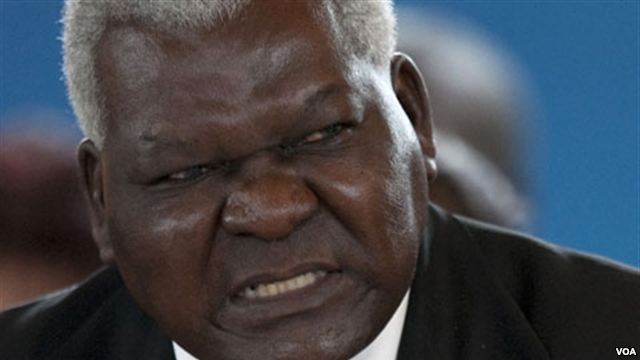 We call the twelve giants of Greek mythology the Titans, the children of Gaia and Uranus who wanted to storm the sky. Perhaps for this reason, and with a good dose of imagination, Mr. Juan Esteban Lazo, a poor street kid from Matanzas, is called the Titan of Jovellanos.

Lazo was one of the Communist militants who in 1985, as part of the process called rectification of errors, ascended to the party leadership because of the color of their skin and thanks to an urgent policy to show the world the image of a Cuba without racial discrimination.

Since 1992 he has been one of the five vice presidents of the Council of State. He was first secretary of the Party in Matanzas province, his work characterized by its impermeability to reason. Some people say that his brand of eyeglasses does not correspond to his way of looking.

Later he held the same position in the wild and hospitable city of Santiago de Cuba where, afraid to return to the abandonment of his childhood, he awoke the passion doing his civic (and cynical) duty of stealing.

Havana did not have the honor of freeing itself from the irrational embezzlement of this black neo-pirate who in the filmmaking of suspense awoke this strange affinity for politics. When the commander-in-chief fell ill, Lazo went from being the steward of Fidel to become the slave of Raul. A logical mutation, when the bribe is higher, you can fake it better.

Lazy, big and fat, it’s thought that a good medicine with natural impunity makes this planet a better place; he is a simple liar who can not transcend, consume good cognac, suffer from job dissatisfaction and play baseball very well.

In repeating a rumor we distance ourselves from the news and credibility; but making the rounds of the corridors of MINREX sotto voce is an alert, practice austerity and remove from the visual radius of Titan anything of value, because of those bad habits. Everyone knows it’s racism, however some Cuban officials abroad, pray to receive a visit from the mentioned leader so they can justify losses, thefts and excesses.