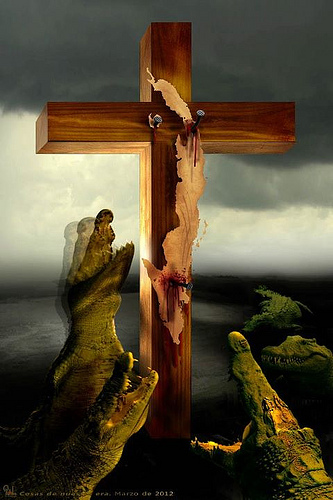 Encyclical of Pope Pius XI on Christ and Communism.

OBLIGATORY READING FOR RED (OR PURPLE) SUNDAY HERE IN CUBA.

Excerpt from the encyclical:

In the face of such a threat, the Catholic Church could not and does not remain silent. This Apostolic See, above all, has not refrained from raising its voice, for it knows that its proper and social mission is to defend truth, justice and all those eternal values which Communism ignores or attacks. Ever since the days when groups of “intellectuals” were formed in an arrogant attempt to free civilization from the bonds of morality and religion, Our Predecessors overtly and explicitly drew the attention of the world to the consequences of the dechristianization of human society. With reference to Communism, Our Venerable Predecessor, Pius IX, of holy memory, as early as 1846 pronounced a solemn condemnation, which he confirmed in the words of the Syllabus directed against “that infamous doctrine of so-called Communism which is absolutely contrary to the natural law itself, and if once adopted would utterly destroy the rights, property and possessions of all men, and even society itself.” Later on, another of Our predecessors, the immortal Leo XIII, in his Encyclical Quod Apostolici Muneris, defined Communism as “the fatal plague which insinuates itself into the very marrow of human society only to bring about its ruin.” With clear intuition he pointed out that the atheistic movements existing among the masses of the Machine Age had their origin in that school of philosophy which for centuries had sought to divorce science from the life of the Faith and of the Church.