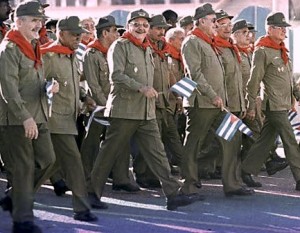 LA HABANA, Cuba, September, Miriam Celaya, www.cubanet.org –The revolutionary movement that took power in 1959, from its inception kept women in a position subordinated to male leadership.  None of the revolutionary programs included female emancipation.  Moreover, no woman took part in the crafting of the program or gave input about the objectives and social aspirations of society’s feminine sector despite the fact that already in the 1950s they were an important labor and student force, even in the universities.

At the end of the insurrection, no woman had reached higher military ranks as opposed to those who participated in the 19th century wars of independence.

The feminine sector committed to the revolutionary movement followed the patterns established by a strongly sexist tradition, and submitted itself to the always male high command’s decisions, thus being relegated to reproduce –during the war and later on the new social stage– the patriarchal model with its rigid separation of gender roles.

Nevertheless, Fidel Castro recognized the importance of the feminine force as shown during the brief imprisonment of the attackers of the Moncada Army Barracks when many women mobilized themselves into action to collect 20 thousand signatures requesting amnesty for the young revolutionaries and presented them to the Senate. Castro understood the importance of this force, and therefore created a women’s front at Sierra Maestra –Mariana Grajales Female Battalion (1958)– under the command of the 26 of July Movement lead by him.

Once in power, they created the Revolutionary Women’s Union, the predecessor of the Federation of Cuban Women (FMC), to mobilize women in support of the revolution’s social programs.  All republican women’s organizations, including those that had supported the revolutionary struggle, were dismantled to preclude tendencies different from those dictated by the new political power. At the same time, no woman was considered to occupy a position with the decision making circles; only one occupied  briefly the post of Education minister, and Vilma Espín, Fidel Castro’s sister in-law, led the FMC from its creation to her death.

The main objective of the FMC was, in principle, to promote women’s participation in the country’s political, economic and social life, but always dependent on a complete loyalty to the revolution and the new ideology now in power.  Thus, “the FMC described itself as a feminine organization, but not a feminist one since feminism was considered a social movement that took away efforts and attention from the revolutionary struggle, aside from being the ideology of idle bourgeoisie.”  Most women accepted being part of the organization. Eventually, membership became automatic for women older than 14 years of age, so by 1995 around 3 million Cuban women, 82% of the female population, were “affiliated” to the organization.

Feminist ideology was diluted within a “collective revolutionary way of thinking.”  As the civic tools developed during the Republic disappeared, women were definitely left at the mercy of the government’s will.

Paradoxically, paired to the loss of female autonomy in politics, more than 60 percent of professionals and highly specialized technicians are women.  In contrast, most of the leadership positions are occupied by men, and this illustrates the prevalence of male patterns that maintains discrimination vis-à-vis the supposed “conquests” granted from the circles of power.  Despite their alleged emancipation, Cuban women continue to be subjected to discrimination masked by a false egalitarian discourse.

Currently, government reforms that legalize investments in the private sector also show the wide prevalence of men as business owners and entrepreneurs.  Women come to the new economic stage, where male protagonism prevails, at a disadvantage.  There is no political program to equalize the opportunities between the genders for the future of the island, and in the absence of a really autonomous feminine movement, women are left in the most abject civic helplessness.

But full emancipation also requires full civic responsibility.  The strong presence of women within the dissidence and the independent civil society points to an opportunity for the resurgence of women’s struggles in times to come.  Only in a democratic scenario will it be proven whether the necessary foundations for a gender conscience exist in Cuba.