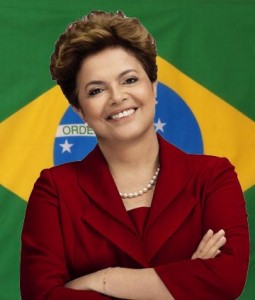 One gray afternoon, after working an intense 12 house in her office in Planalto, Brasilia, the Brazilian president Dilma Rousseff, 63, took her laptop which she took everywhere, and confessed to the Newsweek reporter Marc Margolis, “When I was a little girl I wanted to be a firefighter or a ballerina, period.”

It was not to be. Dilma, like many of her generation, was a product of her times and circumstances. In the years she was studying at the university, her colleagues around the world, while defending making love and not war, were listening to the Beatles, wearing Che Guevara t-shirts and chewing Havana cigars like Fidel Castro.

Those were other times. The Paris of 1968, the conflagration in Vietnam, the specter of communism that dazzled many intellectuals and the cold war period.

Dilma, daughter of her time, also went out into the streets to protest against the military regime in Brazil and believed a different world was possible. She joined the guerrillas and suffered bad treatment and jail cells.

Now, at the age of a grandmother, in her spare time, she may review her hectic life as if looking into a kaleidoscope. In this age of the internet and globalization, the first woman president of Brazil knows that good intentions are not always the ideal way to design a model that integrates the excluded and hungry.

Dilma was forged by her political manager, the legendary Luiz Inacio ’Lula’ da Silva, a metalworker from Sao Paulo, who despite having completed only a primary education, became Brazil’s most popular president. And into a political diva, whom everyone rushed to invite to any important forum convened by the powerful.

From Lula she learned a simple and real lesson: the barricades, chaos and disorder, should be left at the door when trying to administer a powerful nation with a huge gap between rich and poor.

Rousseff knows well that governing is a balancing act. Zero hunger is not bad. Possibilities for the forgotten of the favelas and improving the quality of education and public health will always be something praiseworthy.

But for people like Dilma or Lula, a more just society need not polarize the country and denigrate the productive Brazilian middle class, an essential factor in generating wealth. They belong to the modern left which long ago dismissed the strange theories of Karl Marx because they never worked.

Dilma, in addition, bets on the greatness of her country. And puts it on the map of the first economic powers. She plans to socialize the favelas, and end the violence and drug trafficking. Create a memorable World Cup and Olympics and, above all, to do away with the endemic corruption in the giant country.

Brazil is a privileged partner of the United States and the leftist Lula was one of George W. Bush’s good friends. The Brazilians do not have the destructive and deep-rooted anti-gringo complex. But Dilma, like other Latin American leftist leaders, is guilty of dishonesty when the time comes to condemn or publicly criticize a student of the same class. Especially if that student is called Fidel Castro.

She grew up reading the long speeches of the bearded Caribbean. And in one way or another the olive green Revolution was a symbol. A stateswoman of Rousseff’s stature may intuit that the Castro brothers are part of an epic past. Old newspaper. Dinosaurs running the final stretch.

But like the old songs of the decade prodigious marijuana joint or the hippie, nostalgia is a powerful rip-off artist.

The past always matters. And Fidel Castro and his personal revolution is a parade of longing for people like Lula and Dilma. Rousseff does not come to Cuba to ask, out loud, that human rights be respected.

Nor will she summon the regime to stem the tide of sticks and slaps inflicted on the peaceful dissidence in the public street. Much less will she honor the memory of the regime opponent Wilman Villar Mendoza, who died on January 19 after a 50-day hunger strike.

Nor even in a whisper, after mojitos and canapes, and taking stock of how business is going between the two countries, will the ex-guerrilla chat about the urgent changes needed on the island.

She will not be heard to say that Havana needs to lift the government lock on the Internet and legalize the independent press. Dilma comes to Cuba for other adventures.

To make a 70 million dollar loan to buy agricultural equipment. To inspect the work in enlarging and modernizing the Port of Mariel, where Brazilian banks, thanks to Lula, have invested more than 600 million dollars. To review bilateral relations and sign cooperation accords on the economy, science and technology, among other sectors.

Of course, Dilma is brave and honest. A few days ago she took to task the unpresentable Mahmoud Ahmadinejad for his systematic violations of the rights of Iranian women.

Rousseff has always been adamant about democracy and freedom of expression. Asked by a journalist about State control of the media, she replied, “The only control I know is the command to change the channels on the TV.”

Obviously, in Cuba we will not see that Dilma. The Latin American left still is not ready to publicly condemn autocrats like the Castro brothers.

They form part of its past. They are a specter that frightens them. The ideology of traveling companions eventually turns into ties of blood. Dilma knows it well.