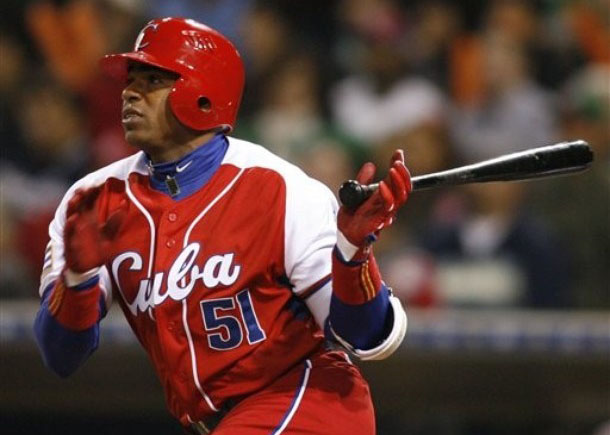 If the rumor about Cuban baseball is confirmed, I think the bad news for the national sport will exceed that having played a tournament in Rotterdam to forget, or that of having been deprived, for the umpteenth time in recent years, of an international title (this time, by Taipei of China).

The threatening rumor is another: Yoennis Cespedes, the greatest slugger in Cuban baseball today and without a doubt one of the shining talents of the island, could be out of it, and not in an official tournament.

The comment has been gaining strength while a not to clarify the lie or confirm its veracity has not appeared. The story, roughly speaking, there would be this: the burly player from Granma province, current owner of the record for home runs in the National Series (with 33), “disappeared” as of last Tuesday, when he should have gone to the capital to complete the preparation towards a trivial ALBA tournament.

An unfortunate incident had occurred a few days before, Cespedes hit a pedestrian while driving a touring car near the coastal town of Manzanillo. The pedestrian was killed in the accident. Yoennis was arrested by the authorities, and after being cleared of responsibility for the event (it is said that the pedestrian was all the fault), was immediately released.

A few days later, according to the rumor, he vanished from the face of the earth, along with his mother and another star player, although not one of the stature of Cespedes, Henry Urrutia from Las Tunas.

All the Cuban specialists, residents on the island, with whom I’ve communicated about it, agree on one thing: if in reality Yoennis Céspedes chose to illegally depart from Cuba in a way that has not been specified, the fatal accident was not the fundamental motive. At best, it would be a complement, not the essence.

How might I describe what would be the reason that another “out of this world” player abandoned his League, his country, in search of another destination, unknown to us but we can surmise. From a mixture of professional dissatisfaction (despite his status as supreme batter, he was not chosen to represent Cuba in the next tournament in Canada, and instead was relegated to an ALBA event that doesn’t even interest the convalescent Hugo Chavez), and personal dissatisfaction: his position as a world “sub-champion”, of an athlete competing and winning internationally, he manages — oh supreme reward! — to collect $100 a month, and receives an electric bicycle as a reward for his effort.

The truth is that behind the mysterious and suspicious history of Yoennis Céspedes, a peasant from Campechuela, who through the force of his hits and his overwhelming talent became known throughout the country and beyond, whether or not his escape is true*, whether he appears triumphant in the morning before the cameras of Cuba or Miami, lies a more comprehensive and robust fact of one more potential migrant: the quick galloping death of Cuban baseball as a reflection of a national death.

Cuban baseball is sick. And critically so.

It would be an agonizing enterprise to list the number of players who in the past, say, ten years have left the country in the most diverse ways. Some take the simple road: scuttling off from their delegations as they compete in a certain nation; others with more risky route, sailing the sea or crossing borders.

Gone are the days of the impact generated by Kendry Morales and Barbaro Canizares when they deprived the Industriales team of a first class player in the first case, and an important player in the second. These, in turn, had replaced the earthquake that originated earlier with the supersonic pitchers Jose Ariel Contreras and Duke Hernández, when they abandoned the National Series for the Major Leagues. The constant rocking, the endless saga that becomes dangerously large, includes names that echo to young fans, both in the cases of Maels Rodriguez and Yadel Marti, and one who with his fabulous touches of the bat was the best lead-off hitter the team has had Cuba in recent years: Leonys Martin from Villa Clara. The new history of absences, of sudden vaporizations that yesterday shook the national stadiums, and the suddenly signed millionaire contracts with MLB: like the impressive Alexei Ramirez.

How? Maintaining its iron fist. Keeping archaic restrictions that are impossible to observe. Pretending to tie the freedom of athletes who know themselves used for the most revoltingpolitics, tying their freedom with humiliating gifts such as an electric bicycle or a half-finished apartment.

And these young athletes have something, against the will of their jailers: a worldview. They have played in real stadiums. They have known real cities. They have talked with their colleagues of other nations, have known their real salaries, including of athletes of lesser stature.

And above all: have known, smelled, felt, what true freedom is. They have looked at the World Baseball Classic at the galactic Japanese playing their seasons in the U.S., but defending the uniform of Japan internationally. They have compared their situation as slaves, flagged with quasi-military orders, obedient to a miracle of longevity — the near cadaver — like the Gallego Fernández (president of the Cuban Olympic Committee), with the rest of the contestants who, no matter what the team in the Major Leagues sweat baseball talent, return to the Dominican Republic, Puerto Rico, Panama, Venezuela, to play for their countries in world events and to bring hope to their fans.

Would not those same players, those Cuban stars, dazzle in the leagues dazzle in the U.S. or Japan, and finance on the Island the construction of real stadiums, sponsor children’s teams? Of course. The stories of Bartolo Colon, Alex Rodriguez and Tino Martinez, are drops of water in a sea of similar practices.

To open the floodgates to recognize the free will of Cuban baseball players, would allow them to return to their homeland after competing in other leagues in the world, would it not avoid the inevitable and unidirectional exodus, and would it not again raise the level of Cuban baseball to the days when there was a real pride in their international supremacy? Who doubts.

A Cuban team today, with the pitching of Livan Hernandez Aroldis Chapman, where Leonys Martin, Kendry Morales and Alexei Ramirez returned to the fields, and where global experience merged with local training among all its members, would surely not the fools that define today’s “Cuba” in almost every tournament it attends.

Of course, recognizing the right to individual liberty and the inviolable belonging to a nation, is not something done by leaders who choose to own the souls of their subjects. When Fidel Castro and his followers found that an effective way to “prove” the superiority of the system in place in the island was by dint of hits and strikes, Cuban baseball players were hung with a golden shackle on their foot, almost more visible and heavier than that of the rest of their countrymen. Among baseball players and Cuban doctors there is a strange coincidence of tropical slavery.

So Cuba falls, Cuba lost, Cuba is wrong over and over in recent years. So Cuba not only loses tournaments, games, important or unimportant, with American university students: it now loses to Curacao, to Taipei, to geriatric squads from the Dominican Republic, and to any team from Korea and Japan that they face.

Is there reason to rejoice? For some, yes. The Baseball-Player-in-Chief no longer has bragging rights. For others, for me, no: I’m not a passionate follower of baseball, I know the suffering of my people who, at least during nine innings in a crumbling stadium in Bayamo and Pinar, feel something like happiness, and that with each loss, with each player that escapes and will never play again, it saddens them with the same intensity with which they assimilate the food shortages, water shortages, lack of love.

Is it bread and circuses for the hypnotized populace? Maybe. But anything that gives a glimmer of peace for Cubans is something that I defend with passion.

To clarify, the story of Yoennis Céspedes, with 33 home runs over his shoulder, is nothing more than another number, another point in sports history today. It will be the same whether his escape is confirmed, or if it’s nothing but a wretched rumor. Anyway, in my opinion, even if he stays on island his career could come to an end: with such a “suspicion of desertion” in tow, superior Cespedes would play in no international events as punishment for the crime he never committed, but might have.

With Tony Castro, (Fidel’s son), a sports doctor made the vice president of the Cuban Baseball Federation, by the grace of his name with pedigree, there will be no second chances for the unreliable Cespedes. Now that I think of it, one of the bizarre ironies of this tragedy to the rhythm of sweat and conga baseball, is that a doctor dressed in Adidas supervises the comatose gravity of our national passion.

Translator’s note: Since this blog post appeared several months ago, Cespedes did leave Cuba and, as of January 2012, has established residency in the Dominican Republic, making him eligible to play in the major leagues in the United States.