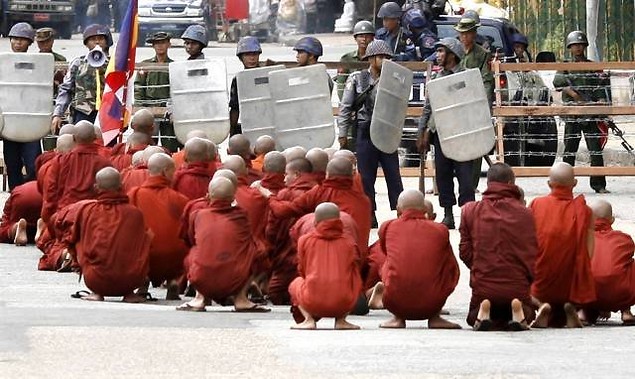 If a disturbing phrase from Milan Kundera affirms that man can never know how to deal the challenges of each day because life is a performance with no rehearsals, a painting without a sketch, a game played without training, then it is also true that there is a generally useful method for us to try to anticipate events, as fortune tellers sniff out the future in the palms of our hands.

It is this: to be attentive to history. Not the History in capital letters that we learn from our school books, but the history that is happening in this second all around us and of which we are an indivisible part.

We can say that for all Cubans, and in particular for the millions spread across the four corners of the earth, this is a method highly recommended for these times. Let’s look at it.

If the exiles from Myanmar — democratic citizens whom a fierce military junta forced to flee from their land over decades — had been told years ago that in 2012 there would be nothing stranger than the current situation of their country, they surely would not have believed it.

Burmese activists founded hundreds of organizations in exile, groups that served, especially starting in the ’90s, as the only sources of information about a country where it was impossible for observers and journalists to enter or leave.

In Thailand alone, Myanmar exiles created 200 associations to denounce and fight politically, receiving substantial funding and help from the international community. They were respected, and their demands for changes in a gagged and repressed country were heard.

But unexpected events rearranged the chessboard, changed the positions of the pieces. Some were even taken off the board. And those turned out to be none other than the ones who had historically played the harshest roles.

The military junta that ruled the destiny of the Buddhist nation since 1962 was dissolved in 2011. Free elections were called. Hundreds of prisoners of conscience were released, including those who had been rotting in the frozen dungeons — such as the comedian U Maung Thura, sentenced in 2008 to 45 years for criticizing the government’s management during the terrible Nargis hurricane — and those who had suffered house arrest — such as the famous Aung San Suu Kyi, winner of the Nobel Peace Prize. And so with each passing day it became more difficult for the exiled Burmese to sustain their confrontational positions toward the diluted dictatorship of modern times.

Or at least to do it without seeming like rebels without a cause.

According to the New York Times, organizations such as the Vahu Development Institute, founded in 1980 by Burmese students exiled in Thailand, suddenly lost their sponsorships, their financial and political support, for one basic reason: the NGOs previously backing their work now believed that if the activists wanted to continue printing banners with Aung San Suu Kyi, now freed and nominated for the Burmese Parliament, and to demand free elections which had already been called, they should do it with their own resources.

Some have returned to the changing Myanmar. The vast majority have not. Rooted in their lives in exile, they have built their families, their businesses, their political doctrines, on a base that has suddenly started to crumble: the enemy has not totally evaporated, but almost. Myanmar has changed before their eyes, and they are no longer in the game.

With their poorly healed loves, wearing their hearts on their sleeves, they don’t see they have ceased to be anachronistic fighters facing the reality they sought, dreamed of, fought for. The tragedy now is that they can’t stop seeing it, and they cannot adapt themselves to the new circumstances.

I don’t believe there is a more suggestive and instructive example for us, Cubans of the diaspora, than this logical course taken by a country where, since 2007, the monks — is there an image more peaceful than that of a Buddhist monk? — were met with bullets in their marches in opposition.

To compare the lethargic moves of the military junta leading Cuba with the process implemented in Myanmar would be hasty and inexact. But to ignore the fact that a journey of a thousand miles always begins with a single step, is to make the mistake that this example of the Buddhist nation alerts us to: to close our eyes and remain in our entrenched positions. To fail to pay attention.

The government of Raul Castro has generated no political change of real weight. But to refuse to admit that in the last four years Cuban society has experienced more alterations than in the last two decades of Fidel’s mandate, would be naive, as well as damaging to winning strategies.

The more superficial and insufficient, the more elementary we assume these changes to be, and above all — after a wait of five plus decades — to deny their existence, does no harm to the government in Havana, nor does it do any favors to the democratic exiles. Rather, it is the first step along this treacherous road of disconnect that many Burmese exiles are now experiencing.

Success against an entrenched enemy, one that has been barely damaged by the techniques of the siege, lies in taking advantage of its timid, trembling, cautious, cowardly, and at times imperceptible maneuvers of surrender.

I could not say that the release of the 75 prisoners of the Black Spring, the respect for religious freedom (which even Secretary of State Hillary Clinton acknowledged in 2010), the sale and purchase of houses and cars, or the implementation of lines of credit to support the businesses of entrepreneurs, are the trumpets that announce the cataclysm. But taken all together, looked at under an objective prism, they can only point toward changes in survival that, if the millions of Cuban exiles know how to take advantage of them, could imply much more than that.

The half century of antagonistic positions do not leave us at the margin of a Cuban reality that is inevitably dialectical, and that at this very minute could be living its death rattle in an atmosphere of misleading passivity. As it has always been. So be it. Minutes before their collapse, all the buildings stood proudly.

Those who have committed their lives in body and soul to reclaiming a nation, “For all and for the good of all,” from an exile never desired, have a challenge of precise intelligence this time, of precious calculation: to not allow the democratization of Cuba to begin with them out of the game. Myanmar leaves her lesson in our hands.