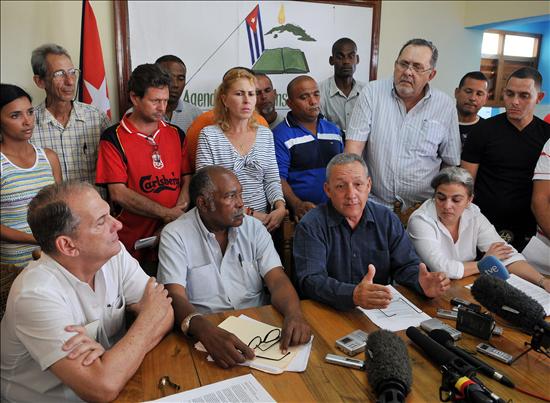 The WikiLeaks revelations have shown the Cuban opposition in a bad light. What a sector of U.S. diplomacy thinks about the poor performance of traditional dissent is the same thing that independent journalists and foreign correspondents talk about.

If a series of shameful acts of corruption, nepotism and caudillismo committed by the leaders of opposition groups haven’t been brought to light, it’s because of that old straitjacket that makes alternative journalists think that making such issues public is a favor to the island’s secret services.

I don’t share that opinion. It’s time for the local opposition groups to change their tune. If they don’t turn 180 degrees and plot their strategies looking inward, they will remain simply a movement of courageous people who openly challenged the Castro brothers’ regime.

To their credit, many opponents must have passed through the harsh island prisons without breaking. It’s admirable that Cubans who could have been peaceful parents or grandparents had the courage to establish political parties and organizations that the government considers illegal and that Cuban laws punish by several years in prison.

But being brave is not everything. Inside the traditional dissent there are quite a few autocrats who pretend to be civil. They are intolerant and dishonest gossip mongers. They have become accustomed to living off U.S. government agency aid or groups and people of different political leanings in Europe.

I am one of those who thinks it’s not healthy to accept money from any government. I could be wrong. Years ago, in a public and transparent manner, the opposition had to tackle that uncomplicated issue.

It’s true: when they take the path of dissent against Castro, as a rule, dissidents lose their jobs and stop collecting a paycheck. It’s also true that they need money to do any political work.

Hiding the issue of money has led to the unfortunate rise of corruption. By not having effective controls, internal democracy and transparency at the heart of many dissident organizations, certain group leaders have shamelessly appropriated money and material assistance.

The list is long of heavyweights inside the dissident movement who steal hand over fist. Out of decency I will not reveal their names. In addition to being corrupt, with some exceptions, the Cuban opposition is mediocre and ineffective. A banana dissidence. You can count on one hand their political projects that try to involve citizens.

The local opposition is directed toward the Exterior. From their living rooms, small groups of people write a document, quote the foreign press, read it on Radio Marti and then feel they’ve accomplished something.

Ordinary people in Cuba don’t even hear about it. It’s painful. The number of people upset by what the government does, I assure you, is broad. If the opposition parties started proselytizing, they would be known in their own country.

There is unexplored territory for the dissident movement. The lack of materials and services in Cuba affects everyone, loyal to the regime or not. Both sides want to repair their children’s schools, the hospitals and streets of the neighborhood. Both sides want to have clean water every day, and not lose 60% due to leaks.

Regardless of ideology, every one suffers from having to travel like sardines in a can on the crowded buses of chaotic urban transportation. Think like they think. Cubans want more and better food. Decent wages. Clean cities. A single currency. To be able to travel without state permission. To have Internet access and satellite dishes for reasonable sums.

In 52 years, the Castros have failed to solve these problems. If the dissidents would do community work in the neighborhoods, they could inspire a number of small and modest projects that would involve and benefit the people. You hardly ever meet activists like Sonia Garro, a black woman living in a slum in Mariano, who helps children living in homes that are small hells.

It’s good to demand democracy and freedom from the regime. But it’s also good to look for options – and solutions – for the women and men deep inside Cuba.

Of course, the secret services do everything in their power to make sure the dissent doesn’t forge a real social base. It’s also true that the traditional opposition has adapted to living from unrealistic projects, better known in Miami than in Havana.

It’s healthy to have different political tendencies and discrepancies inside the dissent. But there are four or five points of agreement between the opponents that would allow them to design joint projects.

Disagreements do not mean the opposition groups are enemies. It’s what happens. But so many quarrels and hatreds have diminished coherent and serious political work.

The current opposition, if it’s not recycled and doesn’t democratize the rules of the game, will be a political corpse. But it’s never too late to change.

Photo: EFE. Press conference of the Agenda for the Transition, Havana, April 2010.