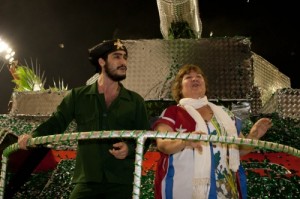 Everyone has a list of types that arouse our worst instincts. No matter if you are a longtime Democrat, ultra-liberal or convinced Marxist.

No matter what you go to church on Sundays, or count to ten to calm yourself down when their names appear in the media.

To love and despise is a uniquely human quality. And like any Earthling I have my trading cards of contemptible beings. They are present. Contrary to popular belief, none of the Castro brothers exacerbates my manias or my sets off a string of curses in my mind.

Yes, Fidel Castro has been a lousy manager of the nation. A bomb proof caudillo and an annoying autocrat annoying. General Raul Castro, the current president, is another political dinosaur who governs from the loyal clan.

Anyone who thinks differently is a sworn enemy. Everyone knows that is the only rule for Castro supporters. But I am still able to read through a ‘reflection’ of the old commander or sit through a speech by Castro II, who fortunately does not talk much.

The Biran duet that has ruled Cuba for the past 53 years, I have them as political opponents. But their perorations, locutions or writings always set me off to write a note refuting them.

There are other characters in the media map of my country, even across the border, the first reaction to whom causes me to run out to join a Nazi party.

The list is short. In the foreground stands Aleida Guevara, Che’s daughter. Her statements irritate me greatly, her twisted foreign forays, despite having been born and lived all her life in Cuba, and her face is hard.

She wants to sell us the image of a monolithic Bolshevik, but hides behind a corporate soul who claims and receives every dollar of marketing with the image of her father.

Armando Hart is next. What a mess the former Minister of Culture provokes in me. I’ve never been able to read his texts in full. He’s a real drag. How cumbersome and intelligible I find his articles, with that lethal combination he concocts from the ideals of Martí, Marxist manuals, and iconic worship of Fidel Castro.

I always turn the page when I see your signature. I feel sorry for the editors who have to include his abominable tripe. Hart awakes in me the censor that many of us conceal.

In any society that respects itself, this old man would be out of a job. Except in Cuba. The mini-collection of trading card villains is completed by Mariela Castro.

Daughter of the soldier’s who governs us, she’s led me to change my opinion. Earlier, I had a certain appreciation for her tolerance toward homosexuals and her trying to open a space closed and barred by her uncle and father.

But then, suddenly, I realized she is a liar of the worst sort. A puppet which purports to show a liberal face nonexistent in Cuba. Her statements in the Amsterdam Red Light District made me pull out my hair.

She should be archived to serve as an example of what a politician or public figure should never say. If she went mute she might pass unnoticed. But she talks, and about what things.

In addition, Mariela wants to form a fifth column with gays, transvestites and prostitutes. The only premise is to support the political ideology of the family clan. Everything else goes.

When the rulers don’t give a damn, or are in their decline, they usually ally themselves with any scoundrel, with God, even with the devil, in hopes of legitimizing their ludicrous policies.

On another level, but equally repellent, are the presenters Randy Alonso, of the Round Table (especially when he laughs), and Rafael Serrano, the mustachioed histrionic of the dull news. When they start to act up I turn off the TV. What heavies they are.

My other damned character is the irrational Venezuelan President Hugo Chavez. But the guy from Barinas deserves a separate chronicle.

Photo: Aleida Guevara, dressed in the Cuban flag, paraded on a float in a tank dedicated to the ‘Cuban Revolution’. It happened in the carnival of Florianópolis, capital of the Brazilian state of Santa Catarina, in March 2011.