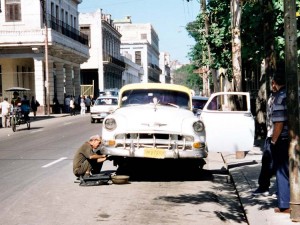 It’s now known that the Castro brothers’ government defends itself by attacking. When an independent journalist or alternative blogger writes about the other face of Cuba that the official media ignores, they jump at your neck like a spring.

They use all kinds of tactics. From offense, calumny, and discrediting to the hackneyed output of justifying the misdeeds that plague Cuban society with the comparative statements that this also happens in other places.

And it’s true. In other latitudes people jump the gate, and in the United States they enter undocumented. In many countries prostitution, drugs and social violence are rampant. But the brutal difference is that this is published in the press. It’s not a secret. Not even the ugly face of the society is hidden.

In Cuba, reporters who are employees of the regime try to color the national panorama with the laughter of happy children, hardworking farmers, humble athletes, honest police officers and, finally, they assert that the island is the best and most efficient democracy on the planet.

They are the fifth wheel of the car. The way they defend a theory is to negate the other. They go over the easy track. Anyone who disagrees is a traitor, a mercenary bought by Yankee gold.

Shamelessness isn’t new. This kind of state misinformation was put into practice by the Bolsheviks first, and by Adolf Hitler later on.

The advantages of having a controlled flow of information are undeniable. It’s easier to govern when you control what is said, informed, and opined.

Since journalism emerged outside of government control in the early 90s or the wave of independent bloggers starting in 2007, the regime viciously attacks those who disagree and sign their names in blogs, websites or foreign publications.

It’s undoubtable that the new technologies are a powerful enemy against the Cuban regime. From the mobile phone and its SMS (text messaging) service, through social networks like Twitter and Facebook and ending with different anti-Castro websites.

The Castro brothers know that the force and state of opinion can generate the network of networks. Because of that they strive to clog the Internet with a troupe of hardworking clerks dedicated to defend them, tooth and nail. They are afraid that the people can access an Internet without locks.

But you can’t cover up the sun with one finger. Cuba has many realities. And nobody can include them. It’s a reality that people who defend the Castros and their tropical socialism exits. Just like it’s also a reality that there are many who oppose them.

Whether or not you like the supporters of the regime, it’s also true that there are prostitutes in Havana that scare people. That corruption is a style of life and civic values have plummeted. Living in illegalities, like gambling or emptying containers into the port, have become normal.

According to my perception, the majority of Cubans are upset with the way the Castros govern. The number of probable immigrants is huge.

The future doesn’t locate talented youth in their country. Cuba is hurting. Even its most ardent supporters admit that they haven’t done their homework well. Their cowardice lies in teh fact that they don’t blame anybody for the disaster. And now there’s someone to blame: Fidel Castro.