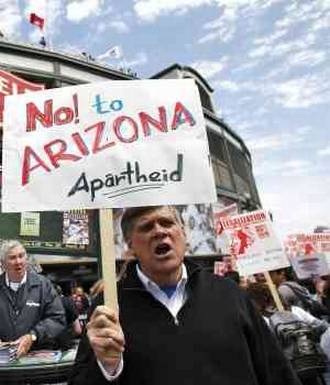 Not infrequently, the Cuban government has spoken out against anti-immigrant laws in developed countries. However, nobody could imagine that there are legal regulations on the island similar to SB 1070, which was passed by U.S. state of Arizona on April 23 and which authorizes state police to arrest people suspected of being an illegal immigrant.

In 2008 the National Assembly expressed its rejection of the Return Directive approved by the European Parliament, calling it a blatant and shameful violation of human rights, the Convention on the Rights of the Child and various international regulations. However, it lets the government punish a citizen who stays in the nation’s capital without permission.

The only difference between the U.S. state and Cuba is that, the former adopted a single legal standard, and on the island there are several: Decree 217 “Internal Immigration Regulations for Havana” of 1997, Decree No. 248, “System of Identification and Registration of Voters” and its rules, and Resolution No. 6 / 07 of the Interior Ministry, both from 2007.

The last two make it illegal for a citizen to live in a new home for more than 30 days without submitting a change of address and his entry in the Registry of Addresses. In addition they require that Cubans over the age of 16 must carry and show identification to the authorities and their agents, whenever requested.

Since 1971, the Cuban government controls the movement of citizens within the national territory, through the Population Registry and Registry of Addresses. These institutions are run by the Ministry of the Interior, a State body responsible for controlling the country’s internal and external migration, complemented by the record books kept by the Committees for the Defense of the Revolution.

For its part, Decree 217 prevents people from other provinces from residing in Havana, the capital of the country, without prior government authorization.

The regulation issued by the Executive Committee of the Council of Ministers establishes a system of personal offenses punishable by fines ranging from 200 pesos to 1000 pesos in national currency, for those who violate its provisions. In every case it requires the offenders to return immediately to their place of origin

The application of this provision also violates personal freedom because the law enforcement agencies are authorized to detain, arrest and deport to their places of origin, people suspected of being an illegal in the capital. However, no criminal regulation criminalizes the stay in the capital as a crime.

There is no doubt about the hypocritical attitude of a government that defines itself as a defender of human rights and criticizes the European Union and the United States for their anti-immigrant policies, when it severely restricts its own nationals from freedom of movement within the island.