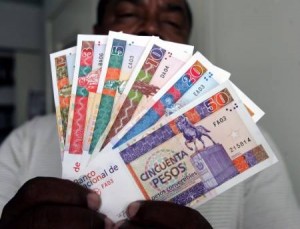 Sixty-ninth place. That is what Cuba is on the 2010 Index of Perception of Corruption, recently released by Transparency International. It shares the same score, 3.7, with Brazil, Montenegro and Romania. The island fell eight steps: from its standing in 2009, when it ranked 61st with 4.4 points.

When I tell this to Daniel, 39 and unemployed, he says: “They have prepared this report without having set foot in Cuba.” He says this from experience. On land belonging to his family, they constructed a rental house. Three times a week the inspectors from the Housing Institute come by.

Perhaps, the agency that is the champion of corruption on the island. They are on the lookout for any irregularities. If you get caught, they get your money. Daniel already has paid 1,200 pesos convertibles (1,000 dollars) in all kinds of red tape.

The officials are insatiable, they always want more. It has become commonplace. They take your silver and look the other way. Corruption in Cuba is not one bad actor. Is endemic and is rooted in the socialist system.

If you go to trade or repair your dwelling, or build a house, get your wallet out. Through legal channels, simple paperwork could take years. But if you surreptitiously hand over 100 Cuban convertible pesos, dollars or euros, then everything works out.

The personnel working at the Housing Institute usually last in their jobs about as long as the cake lasts at a birthday party. Genevieve, a 54-year-old fat mulata, knows about the threads of handling corruption like no one else. She worked in an office at Housing.

“The traffic with property and land is tremendous. People who leave the country are the central objective of the inspectors. Good homes go into the state’s pocket, they are not given to families who lost their homes in a cyclone. Under the table there are big profits from them; they are almost always awarded to the party leaders or some minister,” says Genevieve, who lost her job in a scuffle when delivering one of those houses.

“Almost all those who work in the Housing office and have decision-making power, are involved in the trafficking of influence and money. A consultant had offered me a large sum for the mansion. When the business seemed all sewed up, some super bigwig showed up who wanted it for one of his mistresses. The mess that resulted cost me my job,” she recalls.

In her passage through the Housing Institute Genevieve got a good home and enough money to open a “paladar” (private restaurant). In addition to providing food, she rents rooms to discreet couples at 15 convertibles pesos a night.

The chain of corruption goes beyond housing. It covers all levels. From the traffic cop who stops you to fine you, and when you “touch” him (give him money) he cancels the fine, to a medical specialist who, after you give him a little “gift”, turns on the CAT scan.

Daniel just does not believe that Cuba occupies “such a high place” in the global report. “Nah, that can’t be. I’m not talking just to talk. I know it for myself.” And every day he is a victim of the leech called corruption.